Ahmed Shehzad Trolled for Saying 'I Have Tried My Best in This IPL', Kevin Pietersen Also Has a Hilarious Banter With Pakistan Cricketer During Instagram Live Video Session

Shehzad while replying to a question by KP said he tried his ‘best in this IPL’, the Quetta Gladiators batsman was actually referring to Pakistan Super League (PSL) and accidentally said IPL (Indian Premier League). The video clip has apparently gone viral. 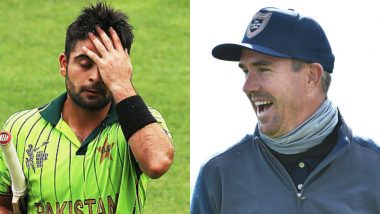 Goof-ups during a live interaction on social media can be so true at times. Once you made a mistake, trolls will make a beeline. Something similar happened with out of favour Pakistan opening batsman Ahmed Shehzad during a live session with former England cricketer Kevin Pietersen. Shehzad while replying to a question by KP said he tried his ‘best in this IPL’, the Quetta Gladiators batsman was actually referring to Pakistan Super League (PSL) and accidentally said IPL (Indian Premier League). The video clip has apparently gone viral. Rohit Sharma Gives a Hilarious Reply As Kevin Pietersen Asks Which Indian Player Hates COVID-19 Lockdown the Most (Watch Video).

Pietersen at the beginning of the video, asked, “I just wanna hammer you about your batting. Why are you not scoring runs?” To which Shehzad replied, “Well, I have tried my best in this IPL. I have been working really hard. Sometimes you know as a cricketer you are trying everything but it’s not coming. You cannot help it. You still have to believe in yourself whenever you go.”

Cricket fans were quick to pick the mistake made by Shehzad and trolled the Pakistani cricketer relentlessly. Here are some of the reaction we found on Twitter: Rohit Sharma’s Daughter Samaira Adorably Greets Kevin Pietersen Saying, ‘Yo’, Mumbai Indians Shares the Video.

Did he just said " i have tried my best in this IPL " ??! I mean C'mon atleast give your league some respect 😂😂😂

Wtf. He said Ipl. The guy got hit in the brain or something?

@iamAhmadshahzad Bhai You tried to your best in this IPL? Seriously? I think That's why you can't perform in this PSL 😂

Interestingly, KP also pulled Shehzad’s leg by saying, “Shezzy, I am not a journalist. I am your buddy so don’t talk to me like you are in a f****** press conference, okay? Why are you not scoring runs?”.

To which Shehzad replied, “You want a clear answer? I was playing (batting) No.3 and I tried but it was not helping me. It was my first time that I played the entire tournament at No.3. I never complained. I was doing my best, I tried my best but it was not coming.”

KP continued his banter with Shehzad and said, “So you don’t wanna bat No.1, you can’t bat 2, you can’t bat three, you can’t bat 4, you can’t bat 5. I think you must go and bat at 13. Go and bat 13 for Quetta Gladiators next season… No.13 for the third team, not even for the first team. You are gonna carry drinks.”

Shehzad had a horrid time in the PSL 2020, as in seven matches the right-handed batsman scored just 59 runs with 12 being his highest score. Quetta Gladiators, the defending champions, failed to qualify for the next round. PSL 2020 semi-finals were eventually postponed following the coronavirus crisis.

(The above story first appeared on LatestLY on Mar 31, 2020 01:08 PM IST. For more news and updates on politics, world, sports, entertainment and lifestyle, log on to our website latestly.com).