Andre Russell Reacts on Shah Rukh Khan’s Tweet After Disappointing Loss to Mumbai Indians, Says ‘Its Not the End of the World’

Andre Russell reacted to Shah Rukh Khan's tweet after Kolkata Knight Riders' disappointing defeat to Mumbai Indians in match 6 of IPL 2021. KKR were beaten by 10 runs after failing to chase down 153 despite dominating the match for a major period. Eoin Morgan's side needed 31 runs from 30 balls with five wickets in hand but lost the game. 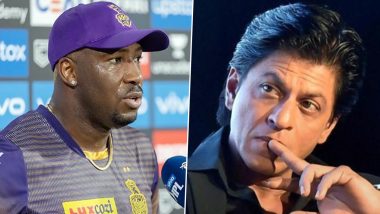 Kolkata Knight Riders all-rounder Andre Russell reacted to team owner Shah Rukh Khan’s tweet after the side’s defeat to Mumbai Indians by 10 runs in match 5 of IPL 2021. KKR conceded defeat, despite dominating for a major part of the game, after failing to chase down 153 runs and have now lost 10 of their last 11 meetings against Mumbai Indians. KKR finished their innings on 142/7 despite needing 31 from 30 deliveries at one stage. The defeat left co-owner Shah Rukh Khan disappointed and heartbroken. The Bollywood superstar took to social media to apologise to the fans for the defeat. KL Rahul Responds to Yuzvendra Chahal After RCB Player Trolls PBKS Captain and Chris Gayle Over Red Shirts.

"Disappointing performance. to say the least @KKRiders apologies to all the fans!" Shah Rukh wrote on Twitter. Russell, who failed to produce the runs with the bat and was out for 15-ball 9, reacted to Shah Rukh Khan’s tweet and said he supported the reaction from the actor. Russell joined Dinesh Karthik (8 off 11 balls) at the crease with KKR needing 31 from 28 deliveries. But the pair could only put a stand of 18 runs in 24 deliveries before the former was dismissed caught and bowled by Trent Boult. KKR went on lose the match by 10 runs. Anrich Nortje Tested Positive For COVID-19, Will Miss IPL 2021 Game Against Rajasthan Royals.

Disappointing performance. to say the least @KKRiders apologies to all the fans!

"Yeah, I support that (Shah Rukh Khan) tweet but at the end of the day the game of cricket... you are not sure until it's over,” Russell said at the virtual post-match conference. Although he disappointed with the bat, Russell was excellent with the ball and picked up five wickets in 2 overs to help bundle MI for 152 after captain Eoin Morgan opted to bat first. With the ball, Russell returned with figures of 5/15 in two overs becoming the second bowler in IPL 2021 and second in IPL history to take a five-wicket haul.

KKR Lose Yet Another Match Against Mumbai Indians

“Yeah, I support that Tweet (from SRK) but at the end of the day the game of cricket... you are not sure until it's over. I think we are still confident, we still played some good cricket and I am proud of the boys,” Russell added. “You know, we are definitely disappointed but it's not the end of the world, it's only the second game and we are going to learn from it.”

"I just think it's a game of cricket. I have played hundreds of T20 games and I have seen games where teams cruise in on the driver's seat and then suddenly lose a few wickets, new batters come in and struggle to get away and that's what happened tonight. So, we definitely have to learn from this as I have said before,” he said.

"We will look to make sure that who's in, stays in and once we learn from all these mistakes that happened tonight we will definitely do better because we have a good team. I have trust and confidence in the boys," added Andre Russell.

(The above story first appeared on LatestLY on Apr 14, 2021 04:17 PM IST. For more news and updates on politics, world, sports, entertainment and lifestyle, log on to our website latestly.com).