A complaint was reportedly made against them because of the loud music that they played and hence the police had to step in to close their celebrations after an epic Ashes series. Australia thumped England 4-0 to retain the coveted Ashes urn. 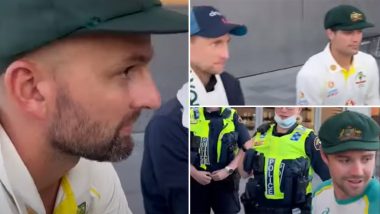 Screengrabs of the players being confronted by police (Photo credit: Twitter)

An Ashes party involving both Australian and England cricketers had to be cut short with police intervention in Hobart on Monday. Australia beat England 4-0 in the five-match series and their celebration reportedly ran long into the night. A video, which was gone viral on social media, shows police confronting the likes Nathan Lyon, England captain Joe Root, Australia wicketkeeper-batsman Alex Carey, James Anderson and Travis Head. The group of players were drinking in what appeared to be a terrace of a hotel when they were confronted by the police. Lyon and Carey were in their white jerseys while Root had a Nathan Lyon jersey wrapped around his neck. Pat Cummins Calls Usman Khawaja on Podium, Directs Teammates to Hold Champagne Celebration Post 4-0 Ashes 2021-22 Win Over England (Watch Video)

It was later reported that a complaint was made against these players because of the loud music that they played while partying. In the video, the police were heard saying, "Too loud. You have obviously been asked to pack up, so we’ve been asked to come. Time for bed. Thank you."

Later, it came to be known from a report that a spokesperson of Tasmania police that they had to remove some players from the Crowne Plaza Hotel bar. Daily Telegraph quotes the spokesperson saying, "Tasmania Police attended the Crowne Plaza Hobart on Monday morning after reports were made of intoxicated people in a function area. The guests were spoken to by police just after 6:00 am and left the area when asked. No further action will be taken by police.”

(The above story first appeared on LatestLY on Jan 18, 2022 11:28 AM IST. For more news and updates on politics, world, sports, entertainment and lifestyle, log on to our website latestly.com).