Brothers Who Have Played International Cricket for India: From Nayudus to Pandyas, Check Out Full List

After years of grinding in domestic cricket, Krunal Pandya made his ODI debut in the first encounter against England at the Maharashtra Cricket Association Stadium in Pune. It was indeed a special moment for Krunal as the all-rounder received his maiden ODI cap from none other than his younger brother Hardik. 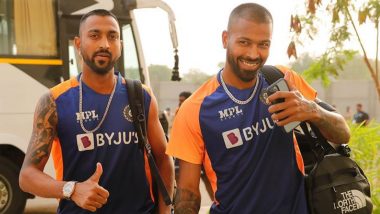 After years of grinding in domestic cricket, Krunal Pandya made his ODI debut in the first encounter against England at the Maharashtra Cricket Association Stadium in Pune. It was indeed a special moment for Krunal as the all-rounder received his maiden ODI cap from none other than his younger brother Hardik. The junior Pandya has been a cornerstone of India's white-ball team in the past few years and doesn't need any introduction. On the other hand, the southpaw was in staggering form in the recently-concluded Vijay Hazare Trophy and would be raring to prove his mettle in the international arena. As Hardik & Krunal join forces in the first ODI, let's look at the other pair of brothers who played for India. Band of Brothers! Hardik & Krunal Pandya, Sam & Tom Curran Take the Field During India vs England 1st ODI 2021.

Irfan and Yusuf were the last pair of brothers to have represented India in ODIs before the Pandyas. While Irfan was a fast-bowling all-rounder, Yusuf was a power hitter who could chip in with his handy off-breaks. Both Yusuf and Irfan made their last international appearance in 2012 and announced their retirement from all forms of cricket in 2020. They were recently seen in the Road Safety World Series, where India Legends emerge victorious.

The Ali brothers made their Test debut in India's inaugural Test match, against England at Lord's in 1932. While Wazir was a top-order batsman, his younger brother was a fast bowler. Wazir & Nazir passed away in 1950 and 1976, respectively. Notably, Wazir Ali's son, Khalid Wazir, played Test cricket for Pakistan.

Mohinder and Surinder had cricket running in their veins as their father, Lala Amarnath, was India's first-ever centurion in Test cricket. Following his footsteps, both Mohinder and Surinder became batsmen but had contrasting careers. While Mohinder became a cornerstone of the national team and even was part of India's World Cup-winning team in 1983, Surinder played just 10 Tests and three ODIs.

Both Madhav and Arvind were batsmen who represented India in seven and one Test, respectively. Madhav made his last international appearance in 1953, while Arvind's only game came in 1959.

A right-arm pacer and handy lower-order batsman, Amar Singh represented India in seven Tests between 1932 and 1936. His elder brother Ladha, on the other hand, played just one game for India in 1933.

Subhash Gupte was one of India's finest leg-spinners who represented the national team between 1951 and 1962. His younger brother Baloo was also a leggie but played just three Test matches for India.

Kripal and Milkha were top-order batsmen who represented India in 14 and four Test matches, respectively. Both weren't able to make a significant mark in the international arena.

C.K. Nayudu was the captain when India played their very first Test match against England in 1932. He, in total, played seven Test matches, whereas his younger brother C. S. Nayudu played 11 Tests between 1934 and 1952.

(The above story first appeared on LatestLY on Mar 23, 2021 05:29 PM IST. For more news and updates on politics, world, sports, entertainment and lifestyle, log on to our website latestly.com).