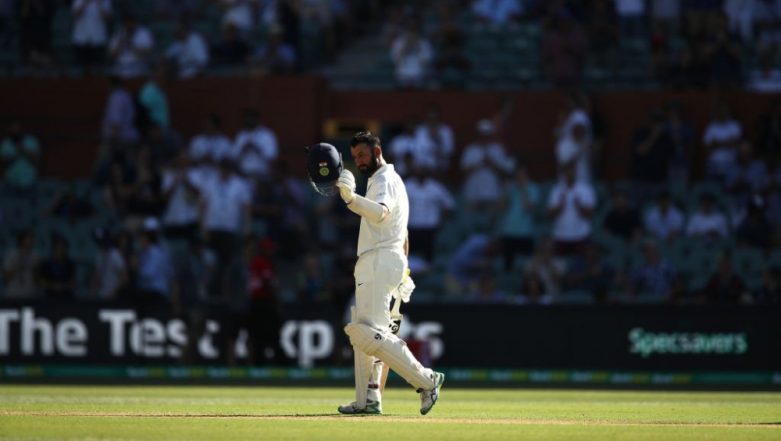 Cheteshwar Pujara scored his Test career’s 17th century during the day two of India vs Australia third Test at the Melbourne Cricket Ground (MCG). Resuming on an overnight score 68, Pujara as usual batted with intent to convert his half-century into the three-figure mark. The right-handed batsman brought up his century with a boundary down the ground off Nathan Lyon. Ind vs Aus 3rd Test Live Score Updates.

Pujara has been in great form this series and now has two centuries against his name from five innings apart from a half-century. It took Pujara, who is being regarded as the new wall of the Indian cricket team, 280 balls to complete his century.

Pujara came out to bat on day one when India lost the wicket of makeshift opener Hanuma Vihari. The 30-year-old batsman then added 83 runs stand for the second wicket with debutant opener Mayank Agarwal. Following Agarwal’s departure, Pujara formed yet another partnership with captain Virat Kohli and the duo took India to a decent position.  Virat Kohli Breaks VVS Laxman’s Record, Moves Second on List of Most International Runs by an Indian Against Australia.

India's number three scores yet another crucial ton - his second of the series!#CricketMeriJaan #AUSvIND

If you had to find to pick a batsman to bat for your life in the current generation, that man would be Pujara for me. Is there anyone who sticks around quite like him? #AUSvIND pic.twitter.com/wGx8TZ3pzx

The first time Pujara has got two hundreds in an overseas series. This has been the year he has been reborn as a batsman

On day one, debutant Agarwal scored 76 after India opted to bat first. The four-match Test series is currently levelled at one each and the teams are fighting to take an unassailable lead.