Shikhar Dhawan, who has been in good form with the willow in hand, would be a good choice for the captain's slot while West Indies' Evin Lewis, who has the tendency to score quick runs during the powerplay and at the death, can be picked as vice-captain for your Dream11 Team. 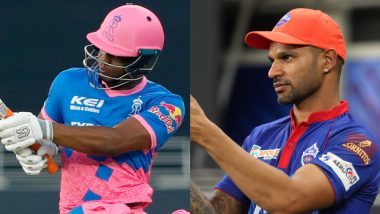 Delhi Capitals would aim at continuing their fine form in this season's Indian Premier League when they face Rajasthan Royals on Saturday. The Royals are coming into the clash on the back of a thrilling two-run win over Punjab Kings in their last match but this time, they would expect to do more than pull things off in the last over. Delhi, under Rishabh Pant's captaincy, has not put a foot wrong this season as they comfortably sit second in the table, with 14 points from nine games and just another win would ensure their qualification to the playoffs. Their win over Sunrisers Hyderabad was a perfect testament to their dominance this season. Led by the fiery South African duo of Anrich Nortje and Kagiso Rabada, their bowling attack seems to be in real good hands and once again, they would be difficult for the opposition to deal with. Shikhar Dhawan has been their star batsman, not only giving them good starts as an opener but also leading the Orange Cap list. DC vs RR, Dream11 Team Prediction IPL 2021: Tips To Pick Best Fantasy Playing XI for Delhi Capitals vs Rajasthan Royals Indian Premier League Season 14 Match 36

Rajasthan Royals however, would be very high on confidence after pulling off an unlikely win over Punjab Kings in their last match. Picking players as captain is  something that regular Dream11 players are well acquainted with. The captain fetches double points while in case of the vice-captain, the points are multiplied x1.5 times. Following are the best choices for the captain and vice-captain's positions for this match. IPL 2021 Points Table Updated: Chennai Super Kings Back on Top With Win Over Royal Challengers Bangalore

The left-hander has been in sensational form and sent out a message to the national selectors after being ignored for India's T20 World Cup squad. He has by far been the most consistent batsman in this IPL, leading the race for the Orange Cap with 422 runs. In Delhi's last match against Sunrisers Hyderabad, Dhawan continued his carnage with the bat, scoring 42 runs off 37 balls and set the platform for his side's comfortable win. He would be the best choice for the captain's slot in your Dream11 Team.

The West Indian left-hander, who was in good form in the recently concluded Caribbean Premier League, gave his side a flying start in the last match and his ability to score at a quick pace, especially in the powerplay would be crucial for Rajasthan Royals once again. He would be a good option to choose as your vice-captain for this important clash.

(The above story first appeared on LatestLY on Sep 25, 2021 09:29 AM IST. For more news and updates on politics, world, sports, entertainment and lifestyle, log on to our website latestly.com).