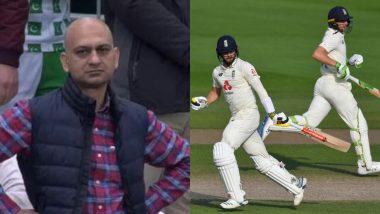 Jos Buttler and Chris Woakes scripted one of the finest come-from-behind wins as England defeated Pakistan by three wickets in the first Test at the Old Trafford Cricket Ground in Manchester. The duo added match-winning 139 runs for the sixth wicket and helped England chase down 277. When Buttler and Woakes joined hands, England were 117 for five. The duo produced an epic counterattack and batted Pakistan out of the game. Pakistan vs England Stat Highlights 1st Test Day 4: Jos Buttler, Chris Woakes Shine As Hosts Register Impressive Win.

What appeared to be a Pakistan’s game turned out England’s win thanks to Buttler, and Woakes stand. Apparently, Pakistan fans were not happy with the team’s performance and took to Twitter to showcase their disappointment. Interestingly, ‘disappointed Pakistan fan’ meme which was viral during ICC Cricket World Cup 2029 surfaced again after Pakistan were handed a three-wicket defeat. Here are some reactions we found on Twitter. Pakistan vs England 1st Test Day 4 Highlights.

When Pakistan played a good cricket but still lost the Match.

Pakistani fans after there team snatched defeat from the jaws of victory : pic.twitter.com/7HZr8dc0Fs

While Buttler scored 75 off 1010 balls, which included seven fours and six, Woakes finished unbeaten on 84 and smashed ten fours. For Pakistan, leg-spinner Yasir Shah picked four wickets. The second Test starts from August 13 at The Rose Bowl in Southampton.

(The above story first appeared on LatestLY on Aug 09, 2020 12:24 AM IST. For more news and updates on politics, world, sports, entertainment and lifestyle, log on to our website latestly.com).