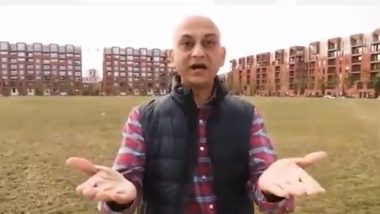 Any ardent cricket fan will remember the dejected face of the ‘disappointed’ Pakistani fan after his team was knocked out of the 2019 ICC Cricket World Cup. Muhammad Sarim Akhtar’s pose went viral for his expression during the 2019 WC and since then he has become a meme fest on social media. His ‘disappointed’ expression was first caught on camera during the PAK vs AUS match in Taunton. Well, Sarim is back again but this time he is joyful, full of hope and excited to watch his favourite team Pakistan play England in a three-Test series. Sarim also had a message for his team. Pakistan Likely Playing XI for First Test vs England: Check Out PAK's Predicted Team for Series Opener.

Pakistan begin their three-Test match series against England on Wednesday with the opening game in Manchester and ahead of the clash, Sarim wanted to send his voice of support and cheer for his beloved side. The London-based resident had a video message, which was tweeted by the official account of the Pakistan cricket board (PCB), for the Pakistan team. Incidentally, Sarim was wearing the same outfit which he had donned when the camera first caught him during the World Cup. England vs Pakistan 1st Test 2020: Ben Stokes, Naseem Shah, Babar Azam and Other Key Players to Watch Out.

He started his message by telling his trolls that it has been over a year. They should forget that pose. He then tells the Pakistan team, “play with pride and passion.” The video was shared by the PCB with the following caption: “The meme fame Sarim has a simple message for team Pakistan.”

'Disappointed' Pakistani Fan Has a Message for His Team

Play with pride and passion!

The meme fame Sarim has a simple message for team Pakistan.

Send in your messages for Pakistan team using #SuperFans pic.twitter.com/gQszBbL7Fc

“The Pakistan team have come to England for a Test series! Wow, what an exciting time! Well a simple message for Pakistan, play with pride and passion. Last time we had drawn the series and this time we have to win. With a simple message, if the ball is outside off let it go,” Sarim says in the video.

Expectedly, his video has gone viral with many fans recalling seeing him in the same attire during the World Cup while some also used his viral pose to troll the Pakistan team. Take a look at some reactions.

Fans After Watching It!

Me throughout the video: pic.twitter.com/KHr9DmiSPE

After the PAK vs ENG Test Series

After the test series: pic.twitter.com/GVvQR1nlfK

Bhai jaan I hope you have several pairs of the clothes. All your fans will demand you wear the same clothes forever :)

Sarim, however, has every reason to be optimistic about his team’s performance. Pakistan are the only side to draw successive Test series in England in the past decade and have won three games in their six matches in England. They held England to 2-2 draw in 2016 and played a 1-1 draw in 2018. Pakistan have come with a little inexperienced batting line-up but have an express battery in their side to exploit the English conditions.

(The above story first appeared on LatestLY on Aug 04, 2020 11:27 PM IST. For more news and updates on politics, world, sports, entertainment and lifestyle, log on to our website latestly.com).