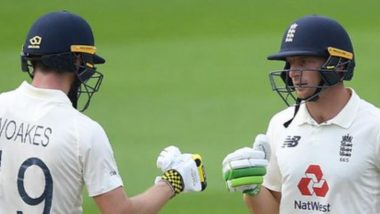 Jos Buttler and Chris Woakes stitched 139-run partnership for the sixth wicket to help England register an impressive win against Pakistan at the Old Trafford Cricket Ground in Manchester. From 117 for five onwards, Woakes joined Buttler as the duo put up a courageous show to lead England's fightback. After having picked five England wickets, it appeared Pakistan will take a lead in the three-match series. However, Buttler and Woakes had other ideas. While Buttler fell on an individual score of 75, Woakes finished unbeaten on 84 and hit the winning runs. Pakistan vs England 1st Test Day 4 Highlights.

The day four began with Pakistan's lead at 244. Yasir Shah played few shots in the morning before Pakistan were bowled out for 169 runs, effectively 276. England openers began cautiously but in the 12th over Mohammad Abbas trapped Rory Burns in front of the wickets.

England kept losing wickets and were 117 for five before Buttler, and Woakes stand blew away Pakistan. Leg-spinner Yasir tried hard to bring Pakistan back in the game with his four-wicket haul but century stand between Buttler and Woakes had game covered for the hosts. Meanwhile, let's take a look at some stat highlights.

# This is Pakistan's seventh consecutive defeat in Tests outside UAE and Pakistan.

# This was Chris Woakes' fifth half-century in Tests.

# This is the fifth instance of a team chasing down 277 or more in fourth innings against Pakistan. First since 1999 by Australia in Hobart.

# This is just the second time a team has chased down a fourth-innings target against Pakistan despite conceding 100-run first-innings lead.

For Pakistan, apart from Yasir's four wickets, the pace trio of Abbas, Shaheen Afridi and Naseem Shah picked a wicket each. Apart from Buttler and Woakes' half-centuries, Joe Root scored 42. The teams will now face-off in the second Test from August 13 onwards at The Rose Bowl in Southampton.

(The above story first appeared on LatestLY on Aug 08, 2020 11:42 PM IST. For more news and updates on politics, world, sports, entertainment and lifestyle, log on to our website latestly.com).