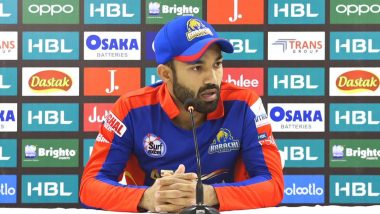 Derby, July 23: Pakistan wicket-keeper Mohammad Rizwan on Thursday said there is no added pressure on him due to presence of veteran stumper Sarfaraz Ahmed in the squad for the team's upcoming series against England.

The two teams are scheduled to play three Tests and as many T20Is after the completion of the ongoing Test series between England and West Indies. Sarfaraz has been included in the Pakistan squad as a back-up wicketkeeper for Rizwan and the latter said it doesn't matter who plays as the ultimate goal is to win matches in England. Yasir Shah Can Play Match-Winning Role in England Tests, Says Former Pakistan Spinner Iqbal Qasim.

"I am a fan of Sarfaraz and have a lot of love in my heart for him. There is no added pressure on me due to his presence. He's my senior and I am learning a lot from him," Rizwan told reporters via videoconference as per Cricket Pakistan.

"Healthy competition between players eventually benefits the team. Doesn't matter whoever plays, the goal is to perform and win games for Pakistan. "I am confident in my abilities and will perform whenever given an opportunity. Whoever the team management deems fit, will be in the playing XI," he added.

Sarfaraz had earlier expressed his happiness after being included in the squad and stated he doesn't mind sitting on the bench as having two good wicket-keepers will only be beneficial for the team.

"As far as being a back-up wicket keeper is concerned, I am not worried about being the first or second choice," the veteran wicket-keeper had last month told Geosuper.tv.

"I am happy that I am back in the team and having two wicket keepers is good for the team. We have seen this in past with Moin Khan and Rashid Latif." England vs Pakistan 2020 Full Schedule Announced by ECB, Series to Start on August 5; Hosts to Take on Ireland in ODIs As Well.

The three T20Is, meanwhile, will be played at a single venue in Manchester on August 28, August 30 and September 1 respectively.

(The above story first appeared on LatestLY on Jul 23, 2020 06:28 PM IST. For more news and updates on politics, world, sports, entertainment and lifestyle, log on to our website latestly.com).