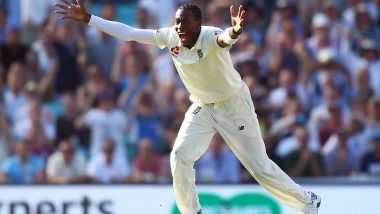 With the pace trio of Jofra Archer, Mark Wood and James Anderson back in the squad, England will face major selection issues ahead of the third and deciding Test match against West Indies. The encounter is scheduled to get underway on Friday (July 24) at the Old Trafford stadium in Manchester. After losing the opening game by four wickets, the home side made a brilliant comeback in the second match by 113 runs and levelled the three-match affair 1-1. Stuart Broad and Chris Woakes played a pivotal role in England’s victory and will be determined to play the final encounter. England vs West Indies, Manchester Weather, Pitch Report & Rain Forecast: Here’s How Weather Will Behave for ENG vs WI 3rd Test.

On the other hand, the home team will also be tempted to include Archer in the XI. Hence, England might decide to drop the lone-spinner Dom Bess in order to name four pacers in their line-up. The off-spinner put up some decent performances in the first two encounters. However, the conditions in Manchester is expected to be cloudy for the most part of the game and the fact will certainly tempt Joe Root to play four pacers- Stuart Broad, James Anderson, Jofra Archer and Chris Woakes. England vs West Indies 3rd Test 2020: Ben Stokes vs Kemar Roach and Other Exciting Mini-Battles.

Along with Bess, Sam Curran is also expected to warm the benches in the third match of the game. Speculations were that wicket-keeper Jos Buttler also might face the axe due to his poor form in Test cricket. However, skipper Joe Root has backed him and the dasher is certain to feature in the deciding the game.

The top four of the team – Rory Burns, Dominic Sibley, Zak Crawley and Joe Root – are also likely to be unchanged while Ben Stokes is expected to play as a specialist batsman due to strain. Ollie Pope will continue to bat at number seven.

(The above story first appeared on LatestLY on Jul 24, 2020 11:41 AM IST. For more news and updates on politics, world, sports, entertainment and lifestyle, log on to our website latestly.com).