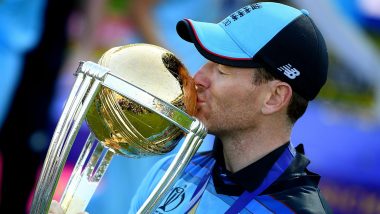 World Champions England will begin their journey towards the 2023 World Cup when they take on Ireland in the inaugural series of the ODI Super League. Both the teams will be engaged in a three-match One-Day series starting from August 30, 2020. The new Super League format is to determine qualification for the upcoming WC and England captain Eoin Morgan is excited for the challenge. ICC Launches ODI Super League Qualification Pathway for 2023 Cricket World Cup in India.

The ICC Men’s Cricket World Cup Super League will consist of 13 teams (12 ICC full members and the Netherlands), out of which the top seven teams will automatically book their spot for the coveted tournament in India. England will be hoping to be one of those sides as they carry the hopes of defending their crown. England vs Ireland 2020 ODI Series Schedule in IST.

‘We’re looking forward to playing cricket again,’ England ODI captain Eoin Morgan said in a statement. ‘Given the situation, it will be quite different to the last time we played at home when we lifted the World Cup at Lord’s, but it’s nice to be starting our journey for the next edition of the tournament.’ He added.

‘I’m sure cricket fans all over the world will be excited to see white-ball cricket resume and we’re looking forward to the challenge. Ireland are a talented team who have shown over the years that they can beat the best on their day. We look forward to what promises to be an interesting series.’ He added.

England have named their 14-man squad for the series and due to the bio-secure protocol rules, players taking part in the Test matches against West Indies have not been called up. Tom Banton, David Willey and Reece Topley are all included and have a huge chance to show their quality.

(The above story first appeared on LatestLY on Jul 28, 2020 12:50 PM IST. For more news and updates on politics, world, sports, entertainment and lifestyle, log on to our website latestly.com).