Fabien Allen took a jaw-dropping one-handed return catch in the third over as Lankan opener Danushka Gunathilaka had to walk back to the dugout after scoring just nine runs. Gunathilaka tried to break the shackles with a hit down the ground. He smashed the ball straight but Allen took a stunning return catch to end his innings. 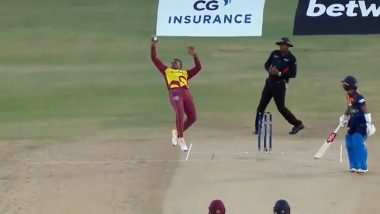 Fabien Allen had a fabulous outing in the third T20I against Sri Lanka as West Indies won the match by three wickets and clinched the series 2-1. After bowling an economical spell and claiming one wicket in the first innings, the southpaw scored a quick-fire 21 off just six deliveries as the Caribbean team pull off a heist. Apart from his bowling and batting, Allen tormented the visitors with his fielding efforts as well. He took a jaw-dropping one-handed return catch in the third over as Lankan opener Danushka Gunathilaka had to walk back to the dugout after scoring just nine runs. Kieron Pollard Smashes Six Sixes in an Over.

As the visitors scored just ten runs in the first two overs, Gunathilaka tried to break the shackles with a hit down the ground. The southpaw went down on one knee and smashed the ball straight. However, his timing wasn’t précised, and Allen sent him back. Despite being in his follow-through, the left-arm spinner controlled his body and took a fabulous one-handed catch from his right hand. The 25-year-old was delighted with his efforts, and it was evident in his celebrations.

This absolute blinder from the Player of the Match Fabian Allen was Spectacular!👏🏾 How good was this Mastercard Priceless Moment? #WIvSL #MenInMaroon #MastercardPricelessMoment pic.twitter.com/oMLQrYeUBd

After Gunathilaka, Sri Lanka also lost Pathum Nissanka and Niroshan Dickwella cheaply and looked in all sorts of trouble. However, Dinesh Chandimal joined forces with Ashen Bandara, and the duo did the repair work. The visitors eventually ended their innings at 131/4. While the target didn’t seem a potent one, West Indies lost wickets at regular intervals and even looked set for a humiliating defeat. However, Fabien Allen’s scintillating big-hitting guided West Indies over the line.

(The above story first appeared on LatestLY on Mar 08, 2021 01:49 PM IST. For more news and updates on politics, world, sports, entertainment and lifestyle, log on to our website latestly.com).