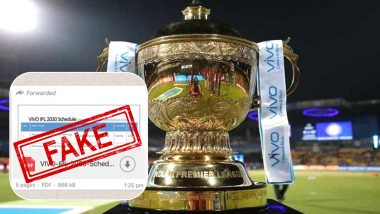 The Board of Control for Cricket in India (BCCI) is yet to announce the full schedule of Indian Premier League 2020 (IPL 2020). As of now, IPL chairman Brijesh Patel has confirmed that the upcoming season will be held in the United Arab Emirates (UAE) from September 19 with final on November 08. He also confirmed that IPL 2020 will be a full 51-day tournament. The official IPL 2020 schedule, however, is not out yet. But chances are you might have already received ‘VIVO IPL 2020 Schedule’ on your WhatsApp in PDF format. It is safe to say that the ‘IPL 2020 Schedule’ being forwarded, which can be downloaded from here, is a fake one, even though start and end dates do match. MS Dhoni Retirement: Will Chennai Super Kings Captain Retire After IPL 2020?

IPL governing council is expected to finalise the IPL 2020 schedule once BCCI gets green signal from the government to host the league in UAE. The cricket board has sought the government’s permission and is awaiting the response.

Abu Dhabi, Sharjah and Dubai will be the venues to host IPL 2020 matches. The matches could be held behind the closed doors, but BCCI will seek UAE government’s advice on this. Also, the matches are expected to start at 3:30 pm and 7:30 pm IST. The fake IPL 2020 schedule being forwarded on WhatsApp mentions 4 pm and 8 pm start, which apparently is incorrect. IPL 2020 Dates Announced: Fans Can’t Keep Calm As Indian Premier League 13 Set to Start on September 19 (See Reactions)

This won’t be the first time UAE will host the Indian Premier League. In 2014, the Gulf country hosted first few matches of the league as they collided with the general elections in India. Meanwhile, players are expected to reach UAE by August 20 to start preparations for the upcoming seasons. Availability of top foreign players is yet to be confirmed.

BCCI is yet to announce IPL 2020 schedule, only start and end dates have been announced.

(The above story first appeared on LatestLY on Jul 25, 2020 02:14 PM IST. For more news and updates on politics, world, sports, entertainment and lifestyle, log on to our website latestly.com).