Kohli now has become the third Indian captain after the great Kapil Dev and iconic Mahendra Singh Dhoni to win a Test match at the Lord's Cricket Ground. He also surpassed the legendary Clive Lloyd by winning his 37th Test match as skipper and he now sits behind Steve Waugh (with 41 Test wins), Ricky Ponting (48 Test wins) and Graeme Smith (with 53 Test wins). 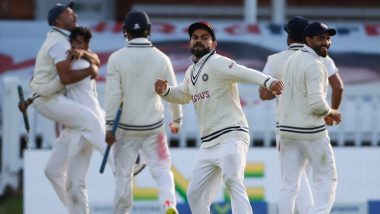 Virat Kohli lets out one of his emphatic celebrations after the Lord's Test match (Photo credit: Twitter)

Exuberant celebrations at the fall of every wicket. Punching the face of the bat after every dismissal and roaring from the balcony after every teammate of his has made a statement on the ground. You might have figured out who I am talking about. Yes, it is the Indian captain Virat Kohli. India witnessed something special on 16th August. In terms of cricket, India wrote yet another chapter in the book on famous Test victories in cricket history. The batting, bowling, fielding--everything sort of got together to write this famous victorious narrative, that would be remembered for the times to come. Apart from just the Indian team's performance, Virat Kohli too caught the spotlight. No, not as a batsman this time but as a leader and a captain, who smashed records and made it to the history books. Virat Kohli Looks Unstoppable Ahead of IND vs ENG Third Test Match, Shares Weightlifting Video on Social Media

Kohli now has become the third Indian captain after the great Kapil Dev and iconic Mahendra Singh Dhoni to win a Test match at the Lord's Cricket Ground, commonly known as the 'Home of Cricket.' He also surpassed the legendary Clive Lloyd by winning his 37th Test match as skipper and he now sits behind Steve Waugh (with 41 Test wins), Ricky Ponting (48 Test wins) and Graeme Smith (with 53 Test wins). With many more years of cricket left in him, one can be sure that he potentially can end up topping this list! But this is all about numbers. What he brings as a captain is very, very different than this.

Kohli, by nature is an aggressive cricketer--one who doesn't step down from a challenge. Be it hooking a pacy Mitchell Johnson for a boundary in the bouncy tracks of Australia to smashing Umar Gul and Co. for fours and sixes in an Asia Cup match in 2012, Kohli has never stopped giving it back to his opponents. To many, his aggression might seem unreasonable, unnecessary and unwanted. But it has so far had serious implications on the way the current Indian team plays. In an interview, not so long ago, Kohli himself revealed how he wants to always go for a win, even when the team is in a losing position. That might not make sense to all cricket fans but it surely does indicate that the 32-year old is never happy being the second best. Also, he has set new fitness standards in the team and anyone who doesn't match up to that faces the axe. Probably why this team is one of the best fielding sides in world cricket today. Virat Kohli Most Foul-Mouthed Individual, Joe Root, Sachin Tendulkar and Kane Williamson Are Level Headed, Says Former England Batsman Nick Compton

And that's why perhaps India went on to win at Lords. When the chips were down and everything looked all over for the visitors, Jasprit Bumrah and Mohammed Shami staged an unlikely fightback and Kohli didn't shy from believing that India could win. Declaring right after the first session, Virat Kohli advised his bowlers and also set up an aggressive field to attack from the first ball. And it paid off massively. Intelligent field changes, smartly manoeuvering bowlers and identifying the weaknesses of the opposition, he did everything right. Adding to all of this, he also brought in this flavour of aggression, of not just staying put by being sledged. But he believes in giving it back to the opponent. His team isn't one that can be bullied easily. KL Rahul beautifully summed it up when he said, "You go after one of our guys and all 11 of us will come right back," while referring to India's aggression at Lord's.

This is exactly what Kohli has brought to this team. When a captain is as competitive as he is, it is bound to have an impact on the whole squad. Bumrah and Shami displayed exactly that. And this might turn out to be one of the most memorable phases in Indian cricket where the squad didn't just win but made an emphatic statement in the process--that this team isn't one to be messed with easily. Win or lose, this Indian team has started believing in themselves, their capabilities and perhaps that's why they are current 'favourites' to win the series. Kohli, for that matter, deserves most of the credit.

(The above story first appeared on LatestLY on Aug 24, 2021 10:46 PM IST. For more news and updates on politics, world, sports, entertainment and lifestyle, log on to our website latestly.com).