India defeated New Zealand by 372 runs in the second Test at the Wankhede Stadium to win the series 1-0. After team India's impressive win, Twitter was abuzz with praises for Kohli and Co. Here are some reactions we found on Twitter, featuring Sachin Tendulkar and Wasim Jaffer. 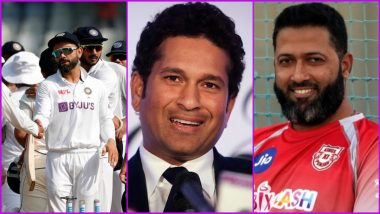 India defeated New Zealand by 372 runs in the second Test of the two-match series at the Wankhede Stadium after Mayank Agarwal's heroics with the bat and Jayant Yadav's four-wicket haul in the second innings. With this win, India sealed the two-match series 1-0. However, the second Test will be remembered for Ajaz Patel's ten-wicket haul in the first innings which made him just the third bowler in the history of the game after Jim Laker and Anil Kumble to achieve the feat. Resuming Day 4 at 140/5, overnight batters Rachin Ravindra (18) and Henry Nicholls managed to add just 22 more runs to the total before the former was scalped by Jayant Yadav and the visitors were starring down the barrel, still needing 378 runs for the win with just four wickets in hand. India vs New Zealand 2nd Test 2021 Stat Highlights Day 4: Hosts Record 14th Successive Series Win At Home.

In his very next over, Jayant Yadav had Kyle Jamieson and Tim Southee dismissed for a duck and it seemed like that the hosts would wrap up the victory before the lunch break on Day 4. The final two wickets also fell in quick succession and in the end, New Zealand was bowled out for 167, handing the hosts a 372-run win. Meanwhile, after team India's impressive win, Twitter was abuzz with praises for Kohli and Co. Here are some reactions we found on Twitter: Virat Kohli Becomes First Player With 50 International Wins in Each Format, BCCI Congratulates Indian Test Captain.

What a victory for #TeamIndia. Congratulations! 👏🏻

A special Test match where wickets in all 4 innings were picked up by Indians! 😉#INDvNZ pic.twitter.com/HAfvPxRDqG

Resounding win for India in their own backyard, comprehensively outclassed New Zealand on a track with turn and bounce. Complete all-round effort with Mayank and Ashwin leading the way, one does feel for history-maker Ajaz. #INDvNZ pic.twitter.com/FFeRu6ZPUC

Well done Team India. Another comprehensive win at home. Many positives in the test match , but the best was to see Mayank Agarwal back at his best. pic.twitter.com/KrHlRhXngr

Thanks for hosting us, India.

Massive win! The magnificent 372-run victory over @BLACKCAPS is India’s biggest win (by runs) in Tests. Great all-round show by #TeamIndia, the spinners were brilliant, @mdsirajofficial was superb but have a big round of applause for @mayankcricket - you were special!🏏#INDvsNZ pic.twitter.com/D2hqFquXwz

The first Test between two sides ended in a draw after Rachin Ravindra and Ajaz Patel shared an unbeaten stand for the last wicket. Team India will now head to South Africa for three Tests and three ODIs, beginning December 26.

(The above story first appeared on LatestLY on Dec 06, 2021 11:47 AM IST. For more news and updates on politics, world, sports, entertainment and lifestyle, log on to our website latestly.com).