Former South African skipper Abraham de Villiers is one name that terrorised bowlers across formats and nations when he represented the Proteas in international cricket. The iconic modern-day batsman is known for possessing every shot in the book; some of them even defying the coaching manual. 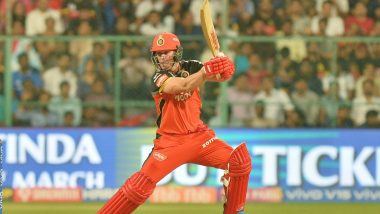 Former South African skipper Abraham de Villiers is one name that terrorised bowlers across formats and nations when he represented the Proteas in international cricket. The iconic modern-day batsman is known for possessing every shot in the book; some of them even defying the coaching manual. Mr 360 as fans popularly call him scored 8765 Test runs, 9577 ODI runs, and 1672 T20 runs for South Africa averaging above 50 in both Tests and fifty over format. AB de Villiers Smashes Quick-Fire Half-Century Against Melbourne Stars in BBL 2019–20, Twitterati Celebrate the Maverick’s Return to Form (Watch Video).

Although he never lifted the World Cup, prolonged success with Proteas ensured fans enjoyed every moment of him on the pitch. With his journey now limited to global T20 leagues, AB de Villiers is at the twilight of his playing career, but his desire to succeed remains the same. As ABD turns 36, we take a look at his top 5 IPL knocks.

79* against Gujrat Lions: With RCB struggling at 29/5 and needing 159 to win, the odds were stacked against Virat Kohli’s men in this run chase, but ABD changed the complexion of the game with a 47 ball 79. The innings showcased what a level headed guy de Villiers is as he battled under immense pressure. AB de Villiers to Come Out of International Retirement? South Africa Star Expresses Desire to Play in ICC Men's T20 World Cup 2020.

89* vs Sunrisers Hyderabad: A game similar to the previous one in nature with RCB chasing down a target of 156 against SRH and their top order collapsing. ABD came up with the goods against as his 89 not out made sure RCB crossed the line with four wickets in the shade.

129* against Gujrat Lions: Batting with a strike rate of 249, AB de Villiers scored a magnificent century against Gujrat Lions showing little mercy to their bowlers. He remained not out at 129 which came off 52 balls with ten fours and 12 sixes and was involved in a record 229 partnership with buddy Virat Kohli.

82* against Kings XI Punjab: This innings came at a time when ABD was a bit out of form having retired from international cricket. His 44 ball 82* had all his favourite shorts and the Punjab bowlers could do very little to curb his aggression.

133* against Mumbai Indians: The best innings in his decade long IPL career came against a quality team like Mumbai Indians and that too in their own backyard. His 59 ball 133* had 19 fours and four sixes. His exploits helped his team put a mammoth target of 235 and secure an easy win.

(The above story first appeared on LatestLY on Feb 17, 2020 08:15 AM IST. For more news and updates on politics, world, sports, entertainment and lifestyle, log on to our website latestly.com).