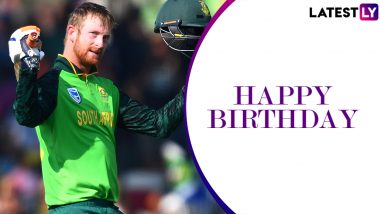 South African cricketer Heinrich Klaasen celebrates his 29th birthday today (July 30, 2020). The wicket-keeper batsman made his debut for the national team against India in February 2018. The cricketer is known for his calm and composed approach on the field while also possessing the ability to clear the boundary rope when needed. So as Klassen turns a year older, we take a look at some lesser-known facts about him.

Born in Pretoria, South Africa, the wicket-keeper batsman burst onto the scene during the 2018 series between India and South Africa when he played some fantastic innings to lead his side to victories. These performances saw the Henrich Klassen being picked by Rajasthan Royals in the 11th edition of the Indian Premier League. He has also represented Royal Challengers Bangalore in the cash-rich league.

(The above story first appeared on LatestLY on Jul 30, 2020 08:30 AM IST. For more news and updates on politics, world, sports, entertainment and lifestyle, log on to our website latestly.com).