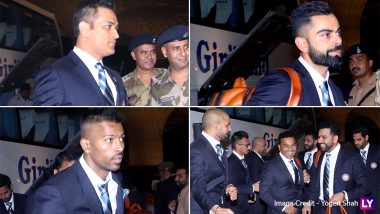 The ICC Cricket World Cup (CWC), 2019 is scheduled to begin from May 30. This will be the 12th edition of World Cup tournament which will take place for the 5th time at England and Wales. Virat Kohli, MS Dhoni and others were spotted at Mumbai International Airport as team India departs for ICC CWC 2019. Rishabh Pant Left Out of Team India for ICC Cricket World Cup 2019, Check Full 15-Man Squad.

This time top 10 Test playing nations will feature in the upcoming World Cup tournament. All teams will play against each other in the Round Robin format as there will be no group division. India will play their first CWC warm-up game against New Zealand on May 25. Let us have look on some of Team India pics from the airport while their departure for World Cup, 2019. ICC Cricket World Cup 2019 Schedule in PDF: Ticket Prices, Dates, Venue Details & Timetable Available for Download Online.

Watch Fans cheering at the airport for Team India!!!

India is two-time world's champion as they won the trophy in 1983 and 2011 under the leadership of Kapil Dev and MS Dhoni respectively. India will play their first ICC Cricket World Cup 2019 game against South Africa on June 5 at Rose Bowl Cricket Ground.

(The above story first appeared on LatestLY on May 22, 2019 09:13 AM IST. For more news and updates on politics, world, sports, entertainment and lifestyle, log on to our website latestly.com).