Named after England's Test head coach Brendon McCullum, the term 'BazBall' has become pretty popular in English cricket in recent times. The term refers to England's confident and free-flowing approach--something that breathed fresh life into the nation's way of playing Test cricket. Dravid had an epic response to a reporter who asked him about 'BazBall.' 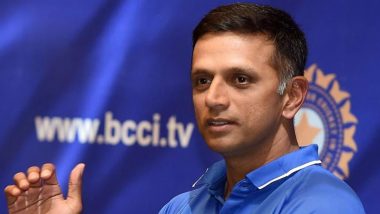 Edgbaston (Birmingham) July 5: India head coach Rahul Dravid had an epic response in store when asked about what he thought of 'BazBall.' Named after England's Test head coach Brendon McCullum, the term 'BazBall' has become pretty popular in English cricket in recent times. The term refers to England's confident and free-flowing approach--something that breathed fresh life into the nation's way of playing Test cricket. While talking to the media after India's humiliating seven-wicket defeat in the Edgbaston Test on Tuesday, a reporter, as quoted by Hindustan Times, asked Dravid, "People are talking a lot about BazBall. Some say this will change cricket entirely. As a coach what is your take on BazBall?"What is BazBall? Know All About England’s New Approach to Test Cricket Under Coach Brendon McCullum

The Indian head coach reportedly smiled and replied, “Don't really know what's that." However. he also said the team will try to rectify the mistakes it made at Edgbaston. Elaborating on the mistakes, Dravid said: "Yesterday (on the fourth day) we didn't bat well. Our bowling thereafter lacked intensity. We have to also give England credit."

India lost by seven wickets after the home side comfortably chased down a target of 378. It was the highest total the Englishmen have ever chased in their Test history.

Dravid said: "It's been disappointing in South Africa and here. It could be a variety of factors. We have to maintain a level of fitness. Our batting has not been up to scratch. We have had third innings (batting) problems both in South Africa and Edgbaston." He went on to say: "We will think about it. After every match there is a learning. Why are we batting poorly in the third innings and bowling poorly in the fourth innings?"

Asked about the omission of off-spinner Ravichandran Ashwin and inclusion of Shardul Thakur in the playing XI, Dravid said: "It's easy in hindsight. It's not easy to leave out someone like Ash (Ashwin). But the wicket had an even layer of grass on the first day. The wicket then did not break up as much as we expected."

About Rishabh Pant, who got a hundred in the first innings and a half-century in the second, Dravid said: "He's playing very well. Sometimes he makes people's heart rates go up. We have to accept that a little bit."

(The above story first appeared on LatestLY on Jul 05, 2022 07:38 PM IST. For more news and updates on politics, world, sports, entertainment and lifestyle, log on to our website latestly.com).