The second T20I between England and India, which is set to be played at Edgbaston on Saturday, will be monitored by "undercover football crowd-style spotters", after Warwickshire County Cricket Club on Thursday unveiled a series of new measures to combat the instances of racist abuse. 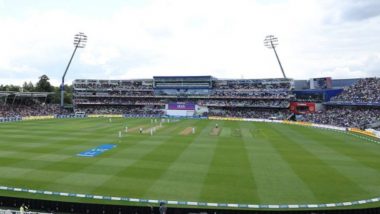 London, July 7: The second T20I between England and India, which is set to be played at Edgbaston on Saturday, will be monitored by "undercover football crowd-style spotters", after Warwickshire County Cricket Club on Thursday unveiled a series of new measures to combat the instances of racist abuse. England won the rescheduled fifth Test against India after chasing down 378 before lunch on the final day, of which 259 were scored on the fourth afternoon and evening. However, that passage of play was marred by reports of racial insults from a section of the crowd. Is India vs England 1st T20I 2022 Live Telecast Available on DD Sports, DD Free Dish, and Doordarshan National TV Channels?

The racial insults issues during the Edgbaston Test were initially highlighted on Twitter by Azeem Rafiq, the former Yorkshire cricketer, which subsequently led to a criminal investigation by West Midlands Police. "Nearly 100,000 people watched one of the most exciting Test matches in recent history earlier this week. But we cannot hide from the mindless racist abuse experienced by some fans following India in the Eric Hollies Stand,'' Stuart Cain, Warwickshire's chief executive, said.

"These unacceptable actions by a small number of people have over-shadowed a superb sporting contest, and those responsible do not deserve to be part of the cricket family. We need to work harder as people, as well as a venue, to take responsibility for ensuring that everyone feels safe and welcome when watching the game," he added. Warwickshire, who are going to host -- this week's T20I against India, next week's Vitality Blast Finals Day and ground's staging of the women's T20 competition at the Commonwealth Games in an exceedingly busy month -- acknowledged in a statement that its "zero-tolerance" approach to stewarding "in isolated areas� hadn't been delivered".

The club's security partner, G4S, is investigating why Monday's incidents were not more swiftly resolved. For Saturday's T20I, Warwickshire confirmed that undercover football crowd-style spotters would be deployed throughout Edgbaston to listen out for abusive behaviour and report it for immediate action. It added that there would be an increased police presence at games to handle such incidents swiftly and enable more chances of successful prosecutions. The club also said that all fans at subsequent matches would be encouraged to report abuse discreetly via the Edgbaston app, adding that anyone found guilty of hate crime will be banned not only from Edgbaston but from all venues under the ECB's jurisdiction. India vs England Free Live Streaming: Watch IND vs ENG 1st T20I 2022 Online on JioTV.

"I was angry that a minority of people thought it acceptable to racially abuse a group of fans who were following India and bringing great entertainment to the Hollies.Those involved had already enjoyed three brilliant days, mixing with England's Barmy Army and creating a welcome atmosphere with their singing and Dhol drums. But on day four they experienced some abuse after tea, and there is no excuse for that," Cain said. "This has given the Club renewed energy and motivation to work even harder to make sure Edgbaston is a place for everyone - regardless of race, sex, gender, ability or background. A few mindless idiots must not distract us. We are determined that any unacceptable behaviour will have a very public consequence. "Meanwhile, I want to apologise directly to any fans who were subjected to racist abuse. Everyone at Edgbaston will work hard to do better, and they are welcome back with open arms in the future," he added.

(The above story first appeared on LatestLY on Jul 07, 2022 08:12 PM IST. For more news and updates on politics, world, sports, entertainment and lifestyle, log on to our website latestly.com).