IND vs ENG, Warm-Up Game: From Shardul Thakur Over Hardik Pandya to Getting Ravi Ashwin in Playing XI, Here Are 4 Experiments Virat Kohli Could Make Ahead of T20 World Cup 2021

Right before India plays their first game against Pakistan in the T20 World Cup 2021, Virat Kohli and the men are all set to play a couple of warm-up games- one against England which will be held later this evening. The other warmup match will be held against Australia on October 20, 2021. 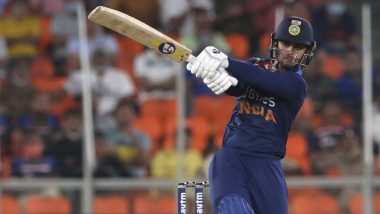 Right before India plays their first game against Pakistan in the T20 World Cup 2021, Virat Kohli and the men are all set to play a couple of warm-up games- one against England which will be held later this evening. The other warmup match will be held against Australia on October 20, 2021. These warm-up games will allow the teams to set their combinations right ahead of the Super 12 stage. This will also help the team management gauge the current form of the players and what combinations could work for the team. India vs England Practice Match Live Streaming Online: Get Free TV Telecast of IND vs ENG T20 World Cup 2021 Warm-up Match With Time in IST.

Now like everyone else, the Indian team could also make a few experiments to get things in place for the playing XI. These games will also allow the players to optimise their abilities to the fullest and even notice their shortcomings. This in the long run as the tournament progresses. Now here are a few experiments the Indian Team could make for the warm-up game.

With Hardik Pandya not bowling a single delivery during the IPL 2021, it is quite doubtful that he might not break into the playing XI. On the other hand, Shardul Thakur has shown much intent. However, he is yet to prove his prowess in the T20s. He has scored 69 runs in 5 innings in T20Is. He is yet to prove himself at such a showpiece event but, if one were to give him a regular chance to bat, surely Thakur can get better.

2.  Bhuvneshwar Kumar in for Jasprit Burmah

For a while now, there has been a lot of chatter about Bumrah's workload. Bringing in Bhuvi could serve two purposes - workload on Bumrah could be managed and also this will give a chance to Bhuvi to gauge his line and length for the tournament ahead.

Ishan Kishan has been one of the most interesting aspects of Indian cricket. his form in the IPL 2021 was something that did not impress many, but in the UAE leg, the Jharkhand batsman did score an unbeaten knock of 50 runs 25 and 84 off 32 this season. With this, surely he is hard to ignore.

Surely he was the highest wicket-taker for India in the shortest format of the game but was ousted from T20 for about four years. Bringing in Ashwin for Rahul Chahar would obviously be a wise idea especially after taking into consideration the pitches in UAE.

It would be interesting to see how the match pans out to be for both teams. Even the English team could make a few experiments for the warm-up match. Do stay tuned to this space for more.

(The above story first appeared on LatestLY on Oct 18, 2021 02:13 PM IST. For more news and updates on politics, world, sports, entertainment and lifestyle, log on to our website latestly.com).