At lunch, India are 339/8 in 109 overs with Ravichandran Ashwin (38 off 54 balls) and Umesh Yadav (4 off 28 balls) at the crease with Iyer and Southee being the standout performers for their respective teams. 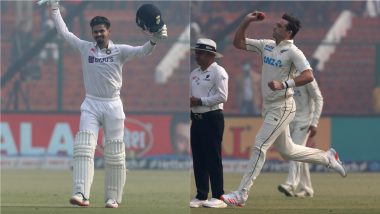 Kanpur, Nov 26: A maiden Test century from Shreyas Iyer and a five-wicket haul by Tim Southee headlined an enjoyable first session on day two of the first Test between India and New Zealand at the Green Park Stadium here on Friday.

At lunch, India are 339/8 in 109 overs with Ravichandran Ashwin (38 off 54 balls) and Umesh Yadav (4 off 28 balls) at the crease with Iyer and Southee being the standout performers for their respective teams. India vs New Zealand Live Score Updates 1st Test 2021 Day 2.

Resuming from 258/4, Iyer began where he left off on day one, with two boundaries off Jamieson's first over of the day. Tim Southee broke the 121-run stand in his second over as Jadeja chopped on to his stumps with no feet movement, departing without adding to his overnight score.

But Iyer was unperturbed, taking another boundary by steering through point off Jamieson. Iyer continued to do well against Jamieson, getting boundaries through a thick edge between slip and wide gully fielder followed by an elegant cover drive.

Iyer reached his maiden Test century with two runs through point off Jamieson in the 92nd over. The 26-year-old became the 16th Indian batter (10th at home) to score a century on Test debut.

He also became the second Indian batter after Gundappa Viswanath (against Australia in 1969) to score a Test hundred on debut in Kanpur.

After Wriddhiman Saha nicked behind to wicketkeeper Tom Blundell off Southee in the 93rd over, Ravichandran Ashwin took consecutive boundaries off him.

Tim Southee (4-56) is having a morning at Green Park in Kanpur. He's now got 3 in the first session and this time the big wicket of debutant Iyer for 105, caught at point. LIVE scoring | https://t.co/yGSlW6a2d5 #INDvNZ pic.twitter.com/vODc7jSxFI

Post drinks break, Southee had his third wicket of the day as Iyer chipped a drive away from the body to cover. Southee completed his 13th five-wicket haul in Test cricket, getting one to seam away from Axar Patel, drawing him into a poke and nicked behind to keeper.

Ashwin continued his counter-attack, taking a boundary each off Southee and Jamieson. He, along with Yadav, ensured that India didn't lose any more wickets leading into lunch. India will be hoping to extend the innings post-lunch with the ball staying very low at odd instances.

(The above story first appeared on LatestLY on Nov 26, 2021 01:16 PM IST. For more news and updates on politics, world, sports, entertainment and lifestyle, log on to our website latestly.com).