Indian Cricketer’s ‘WAGS’ or ‘Significant Others’ 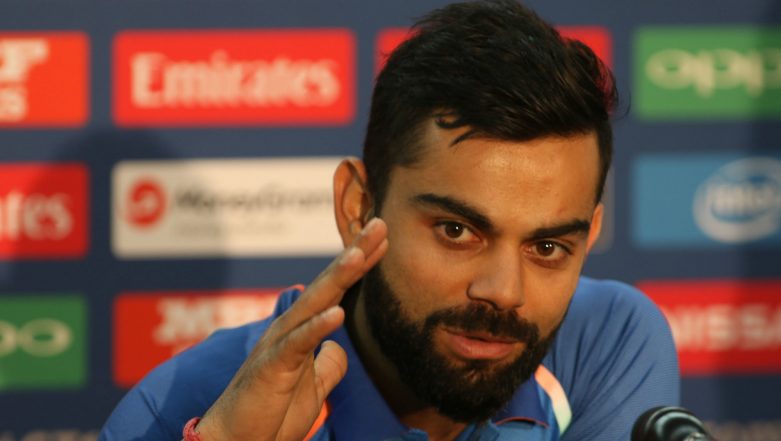 The recent announcement of a cricketers wife or girlfriend (WAGS) being allowed to join them during the World Cup has got peoples tongues wagging. The appropriate ruling, especially after the section 377 should have been "Significant Other". Virat Kohli, the Indian captain has been vociferous in the past, insisting that wives should be a part of an Indian tour overseas. Fans Want Rishabh Pant in ICC World Cup 2019 India Squad After His Valuable Cameo Against Sunrisers Hyderabad in IPL 2019 Eliminator.

The Board of Control for Cricket in India (BCCI) has softened its attitude to towards the issue from their formerly rigid stand by allowing WAGS on tour. This has become an extra ordeal as regards to arrangements for the BCCI, but to see the smiling faces of the Indian cricketers with their loved ones beside them, is a heart-warming sight. A cricketer needs that care and warmth especially when things are not going well. A cricket tour can be a lonely affair when the dice is not rolling in one's favour.

Earlier, the BCCI used to insist that each Indian cricketer must sign an agreement before leaving on an overseas tour stating that his wife was not allowed to accompany him during any part of the tour. This was in many ways quite understandable, as in days gone by, cricketers had to share rooms and apart from the captain no one else was given a single independent room.

In the cricketing world, a wife accompanying a cricketer on tour was looked down upon. Cricket was seen as, especially in England, a "Gentlemen's game", and so the rules of an English gentleman were followed. This is precisely why women were not allowed into the club house at Lord's, Old Trafford and many other grounds around the world. The other reason was that the administrators felt that the presence of a spouse may hinder team bonding and restrict players from being "Men".

The funny outcome of these rules and strict norms was that the cricket administrators turned a blind-eye if a player was accompanied by his girlfriend or a woman other than his wife. Rishabh Pant Left Out of Team India for ICC Cricket World Cup 2019, Check Full 15-Man Squad.

The captain of an international cricket team playing a Test match in Mumbai handled the situation perfectly. He did not believe in the popular saying of "A bird in hand is better than two in the bush". His girlfriend stayed with him in his hotel, whereas, he conveniently booked his wife into another. Similarly, there were umpteen examples of players accompanied by their girlfriends on tours, with roommates being accommodating, by moving out and sharing with another colleague. The married cricketers, naturally, burnt with jealousy, as they could not be accompanied by their wives, while the bachelors did not have any such restriction.

Earlier, overseas tours lasted much longer than they do now. A visiting side played not only Test matches but also several matches against state, club and other such first class sides. A tour to England, Australia, West Indies and New Zealand would be 3 to 4 months long. This led to situations such as the great Sunil Gavaskar missing out on his son Rohan's birth. India were touring New Zealand in 1976 and from there they travelled directly to the West Indies. Only on his return did Sunil finally lay his eyes on his son, a good 4 months later.

Fortunately, these days cricketers are being allowed to be present for the duration of their wives' delivery and after. This has led to many heated arguments, as for the present cricketer, his profession is cricket and for him to miss an important International Test or Limited Overs match is a debatable issue.

The Cricket World Cup is very different from a normal tour. The duration of one and a half month is may be shorted but the focus is far more different. The top 10 cricket teams are in the fray and each match is very important. Every point counts to reach the semi-finals stage and each team member has only one agenda in his mind and that is to win the cup. In England, travel between venues is always a big issue as one has to do it by bus and so delays due to traffic jams and eating at motorway cafes becomes a part and parcel of the journey. These days a cricketer has much more to imbibe off the field than on it.

Opposing players and teams are thoroughly analysed to the hilt. The assembling of a team is not only for net practice but also for watching their competitors' matches and to understand their strategy and game plan. The cricketers' life off the field is lost not only in bonding via various team building exercises but also in learning and planning for his on field action. Therefore, for the player to also look after his wife or girlfriend could be quite a distraction.

The Pakistan Cricket Board has not allowed wives to accompany their players during the World Cup. However, they have been smart to send their team well in advance to get acclimatised to England. Their wives and families are accompanying them then.

The Indian team on the other hand, is permitting the wives to join their husbands only 20 days after their first match of the World Cup. Whether the presence of their better halves during the business end of the tournament will be good or bad them, only time will tell. Play Without Fear Against India in the World Cup, Pakistan Fans Tell Shaheen Afridi; Watch Video.

India start their campaign against South Africa on the 5th of June and thereafter, play Australia, New Zealand and Pakistan. One hopes that the team is well acclimatised by then, as more than the wives they need to get used to the uncertain weather and the cold and windy conditions of England. They will need to be quick off the mark and if not, they will be on a merry holiday when their significant others do happen to finally accompany them in England.