IPL 2020 Could be Cancelled As Pakistan Cricket Board Pushes for Asia Cup 2020 in Colombo During September-October Window: Report 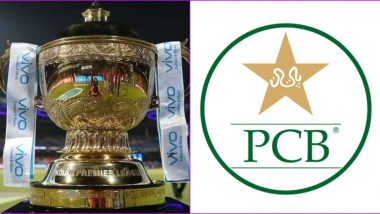 The uncertainty over tournaments like ICC T20 World Cup, Indian Premier League and Asia Cup continues to grow. Following the coronavirus outbreak, IPL 2020, which was original scheduled to be held in March-April, was postponed indefinitely. ICC has not yet decided on the future of T20 World Cup 2020, which is scheduled to take place in October-November in Australia. If the T20 World Cup is postponed or cancelled, Board of Control for Cricket in India (BCCI) will then have a window to organise the IPL 2020. There have been reports of T20 World Cup all set to be cancelled this year and IPL 2020 to go ahead in September-November. However, Pakistan Cricket Board (PCB), reportedly could play spoilsport for IPL, and is pushing for Asia Cup 2020 to be played in September-October. BCCI Plans to Host IPL 2020 Between September 26 and November 8: Report.

If Asia Cup 2020 takes place in September-October, then BCCI will have to cancel the IPL 2020. The Indian board cannot further postpone the tournament as India is scheduled to tour Australia in December and the team will have to reach the country a month earlier in order to stay in quarantine.

Meanwhile, as per a InsideSport report, PCB is in no mood to cancel Asia Cup for IPL. Pakistan has the hosting rights of the tournament and are likely to host it in Sri Lanka. “How PCB can let go of ASIA Cup T20 window for the sake of a domestic league. Asia Cup T20 will be organised as scheduled and as decided between the members over the last teleconference. It is important and critical for the finances of PCB and also for the growth of ACC member boards”, InsideSport quoted a PCB source. IPL 2020 Update: Indian Premier League 13 Chances Brighten As T20 World Cup Inches Closer to Cancellation.

The report further states that, ACC (Asian Cricket Council) members are looking at Colombo as the possible venue for Asia Cup 2020 and in next teleconference it will be formally declared. Meanwhile, Sri Lanka cricket (SLC) also has once again confirmed that PCB has granted them hosting rights. “We had a discussion with PCB and they have already agreed to our hosting this edition due to the present world situation. We had an online ACC meeting (8th June) and they basically gave us the green light to host the tournament”, said Shammi Silva .

“We are now preparing to discuss with the Government about hosting the event and have come up with a proper plan by involving medical officials about how to host the tournament, in keeping with the Covid19 health regulations,” Silva added.

(The above story first appeared on LatestLY on Jun 19, 2020 12:41 PM IST. For more news and updates on politics, world, sports, entertainment and lifestyle, log on to our website latestly.com).