IPL MVP Awards: A Look at All the Previous Most Valuable Player Award Winners of Indian Premier League Ahead of 2020 Edition 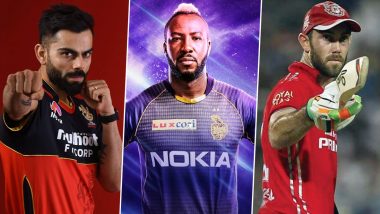 Indian Premier League 13 is set to hit the road from September 19, 2020, with defending champions Mumbai Indians taking on Chennai Super Kings in the opening match of IPL 2020. The first match will be a repeat of last year’s final clash where Mumbai beat CSK by 1 run in the final to win their fourth IPL title. IPL 2020 will run from September 19 to November 10 when the final is set to be played. The group stage will be played till November 3 with Mumbai playing Sunrisers Hyderabad in the final group stage match. Meanwhile, ahead of IPL 2020, let’s take a look at all the Most Valuable Players (MVPs) of the previous IPL seasons. Most Centuries in IPL: Chris Gayle, Virat Kohli and Other Batsmen Who Have Scored Highest Number of Hundreds in the Indian Premier League.

The MVP award is given to the best player of the tournament at the end of the season. The Most Valuable Player is a player who has the best impactful performance and plays match-winning games on a number of occasions. The MVP is also often someone who can strike with both the ball and the bat. In the IPL the MVP award was introduced in 2013 with Shane Watson winning the award for the first time. Prior to 2013, the award was known as the Man of the Tournament. Watson is also the first player to win the Player of the Tournament award. He won it in 2008 after guiding the Rajasthan Royals to the IPL title in the inaugural edition of the tournament. IPL Winners List: A Look at All the Previous Champions of Indian Premier League Ahead of 2020 Edition.

Nine different players have won the Most Valuable Player award so far in the IPL with the trio of Watson, Sunil Narine and Andre Russell only players to win it twice or more times. Watson has won the award both times for the Royals while Narine and Russell have won it for the Kolkata Knight Riders (KKR) on two occasions. Let us look at all the IPL MVP award winners from the previous IPL editions.

Incidentally, 2012 was the last time the IPL winners had a player from their team win the MVP award. Sunil Narine won it in 2012 when KKR became champions for the first time in IPL history since then, players from non-champion teams have won the award. Andre Russell was the MVP winner last season.

(The above story first appeared on LatestLY on Sep 17, 2020 04:00 PM IST. For more news and updates on politics, world, sports, entertainment and lifestyle, log on to our website latestly.com).