Despite thw two-time champions having a better head-to-head record against Royal Challengers Bangalore, they would walk into this clash, with the aim to prove a point and bring their season back on track. KKR are seventh in the points table and need a win desperately to stay alive in the race to finish within the top four. 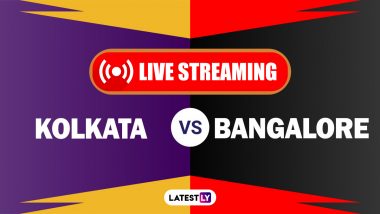 The Royal Challengers Bangalore take on the struggling Kolkata Knight Riders in the second game of the UAE leg of the Indian Premier League. KKR have managed just one win in their last five matches which has pushed them to the 7th spot in the points table. In order to make it to the play-offs, the two-time champions will need a quick reversal in fortunes. Momentum has often played a key role in the success of teams in the league and KKR will hope a win against RCB could lead to further positive results. Opponents RCB were in the news ahead of the game with skipper Virat Kohli stating this season is his last as captain of the side. They are in the play-off spots for now but need to secure at least three more wins before they can feel safe. RCB versus KKR will be telecasted on the Star Sports network and streamed on Hotstar from 7:30 PM IST. KKR vs RCB Preview: Likely Playing XIs, Key Battles, Head to Head and Other Things You Need To Know About VIVO IPL 2021 Match 31

Wanindu Hasaranga is all set to be included in the playing eleven for RCB as they look to exploit the spin-friendly conditions in Abu Dhabi. The unavailability of Washington Sundar can have a bearing on the team considering Kohli often utilized the spinner in the power-plays. Virat Kohli, Devdutt Padikkal and AB De Villiers will continue to be the star men with the bat for Bangalore and even if one of them fires, a good score is a guarantee.

Andre Russell and Shakib Al Hasan need to perform well for KKR with the two players considered premium all-rounders of the T20 format. Tim Southee has come in as a replacement for Pat Cummins and the veteran pacer could play a key role in keeping the RCB batsmen quiet. Eoin Morgan has not really scored big so far and the Englishman needs to establish his supremacy again. KKR have a good team and their precarious position in the points table just might get the best out of the players this evening. KKR vs RCB, Abu Dhabi Weather, Rain Forecast and Pitch Report

Those unable to watch the KKR vs RCB match live on television can follow the game online. Disney+Hotstar will be live streaming the Kolkata Knight Riders vs Royal Challengers Bangalore match online for its fans in India. Fans, however, need to subscribe to Hotstar by paying a nominal subscription fee. JIO are also providing Hotstar subscriptions on select plans.

The match is expected to be a close one despite differences in form and Bangalore predictably winning the contest, given the fact that their squad has a lot of stability and have done well this season.

(The above story first appeared on LatestLY on Sep 20, 2021 10:05 AM IST. For more news and updates on politics, world, sports, entertainment and lifestyle, log on to our website latestly.com).