KXIP vs DC IPL 2020 Dream11 Team: KL Rahul, Kagiso Rabada and Other Key Players You Must Pick in Your Fantasy Playing XI

Delhi Capitals will certainly be the overwhelming favourites against Punjab given their recent results and their position at the top of the team standings. But historically, Punjab have been superior in meetings between both these teams and also lead the head-to-head records with 14 wins. Delhi have won 11 times in 25 clashes 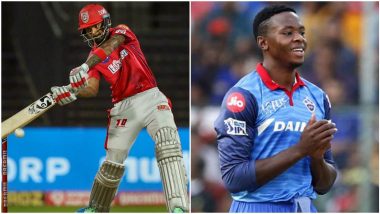 Kings XI Punjab (KXIP) will play Delhi Capitals (DC) in match 38 of Indian Premier League (IPL) season 13 hoping to continue their resurgence. KXIP have are on a two-match winning streak after losing five on the trot in IPL 2020. Their opponents Delhi Capitals are on top of the IPL 2020 points table with seven wins and 14 points from 9 games. It was drama and nerves all around when KXIP and DC met earlier in IPL 2020. Delhi eventually won the game in a super over after Punjab failed to hit one run in three deliveries to clinch the match. KXIP vs DC Preview: 7 Things You Need to Know About Dream11 IPL 2020 Match 38.

Dream11 fantasy players will be eager to pick the right key players for the Kings XI Punjab vs Delhi Capitals match in IPL 2020. Dream11 fantasy gaming platform is quite popular among cricket fans who select their teams to win some cash. Team selection with best picks is always a winning formula in Dream11. Ahead of the KXIP vs DC match, we take a look at five players who should be part of every fantasy playing XI. KXIP vs DC IPL 2020 Dream11 Team Selection: Recommended Players As Captain and Vice-Captain, Probable Lineup To Pick Your Fantasy XI.

The Kings XI Punjab captain is the highest run-scorer in IPL 2020 with 525 runs in nine games. He averages 75 in this tournament and has hit three successive fifties in the last three matches. Rahul has been in terrific form and has been instrumental in Punjab’s back-to-back wins.

Dhawan hit his maiden T20 century in the last match against Chennai Super Kings and led Delhi Capitals to a wonderful win. He has amassed 359 runs so far and is the highest run-getter for DC in IPL 2020. He averages 51.29 so far in the tournament and will once again be the key for Delhi against Punjab.

The talented West Indies left-handed batsman has been devastating every time he has come out to bat this season. Pooran has smashed 19 sixes in IPL 2020, which is joint-highest this season along with AB de Villiers and Sanju Samson. Pooran has scored 242 and although he is yet to make a big score, the West Indian has got off to terrific starts.

Shami kept Punjab alive in the super over and successfully defended 5 runs against the power-packed Mumbai Indians batting line-up. He has taken 14 wickets from nine games in IPL 2020 and is the third-highest wicket-taker in IPL 2020. Shami has been Punjab’s best bowler in this tournament.

He has on fire with the ball both at the start of the innings and at the death. Rabada has taken 19 wickets and is at least four wickets clear of the second-placed Jasprit Bumrah. He has been crucial to Delhi Capitals’ season this year and has been leading their pace attack with aplomb.

Delhi Capitals will certainly be the overwhelming favourites against Punjab given their recent results and their position at the top of the team standings. But historically, Punjab have been superior in meetings between both these teams and also lead the head-to-head records with 14 wins. Delhi have won 11 times in 25 clashes.

(The above story first appeared on LatestLY on Oct 19, 2020 08:15 PM IST. For more news and updates on politics, world, sports, entertainment and lifestyle, log on to our website latestly.com).