The right-hander has witnessed a phenomenal rise in stature as one of the best batsmen in international cricket and has been in good form in the ongoing Ashes in Australia. He recently became the number one batsman in ICC Test rankings. 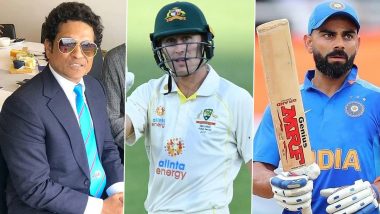 Australian batting sensation Marnus Labuschagne built his perfect batter compiling his favourite shots and elements from some big names in the sport. The young right-hander has grown up to be one of the best in world cricket despite a disappointing debut in 2018. Three years later, he finds himself at the top of the ICC Test batsmen rankings and has a total of six centuries and 12 fifties in the longest version of the game. Before Australia took on England in the fourth Ashes Test in Sydney, Labuschagne built his 'perfect batter' picking some favourite shots of big players in international cricket. AUS vs ENG 2021–22: Usman Khawaja Replaces Travis Head for Australia While England Recall Stuart Broad As Both Sides Name Playing XI for 4th Ashes Test

You Can Watch the Video Below:

We asked Marnus Labuschagne to build his perfect batter and he got so into it that he named TWO 🤣🤣 #DirectHit pic.twitter.com/rKZYlFxVlJ

For his idea of a 'perfect right-hander' Labuschagne said, "For a righty, I'm gonna start with a Sachin Tendulkar's straight drive. That was a shot you loved seeing. So crisp and pure. Then I'm gonna go with Ponting's pull shot - his trademark. Everyone loved seeing the full flow of that." He also lauded Virat Kohli's energy and drew similarities of it with that of Kevin Pietersen, whose aggression was something he loved. "I'm gonna have to go with Virat Kohli's cover drive. I think the way he plays it, the sort of energy that he brings on that ball. Then Kevin Pietersen's that sort of leg-side shot. Also Pietersen's aggression at the crease. I love the way he was at the crease. Very similar to Virat Kohli," Labuschagne added, as quoted by Cricket Australia.

The 27-year old also praised teammate Steve Smith's hunger and singled out further attributes from other players, which he admired. "I'm gonna have to go with Steve Smith's hunger for runs and determination and adaptability. And then I have to get Jacques Kallis' temperament and ability to stay at the crease. Andrew Symonds' hundred with Haydos (Matthew Hayden). Where he jumped and gave Haydos a big hug. That was awesome," he shared.

When talking about the left-hander, Labushchagne said that he was in awe of Sri Lankan legend Kumar Sangakkara's cover-drive. He said, "For the left-hander, I'm gonna start with Hayden's off-drive and also his energy at the crease. There's no better, purer cover driver of a cricket ball than Kumar Sangakkara. Cut shot - I'm gonna go with Justin Langer. More of a square drive."

While picking the pull-shot from left-handers, he opted to go for Mike Hussey and also appreciated former England captain Sir Alastair Cook's ferocity and David Warner's 'bow' celebration after triple hundred against Pakistan. "It's quite tough and we have to move Huss (Mike Hussey) from the cover drive but I will give him the pull shot. Alastair Cook's ability to get in and go big. Cooky when he got going, was just all over. I tell you what, I didn't mind the bow after 300 ( talking about David Warner's vs Pakistan). We tease him about it but I think that was pretty cool," he added.

Labuschagne would be seen in action against England in the fourth Ashes Test which starts on January 5, Wednesday.

(The above story first appeared on LatestLY on Jan 04, 2022 12:43 PM IST. For more news and updates on politics, world, sports, entertainment and lifestyle, log on to our website latestly.com).