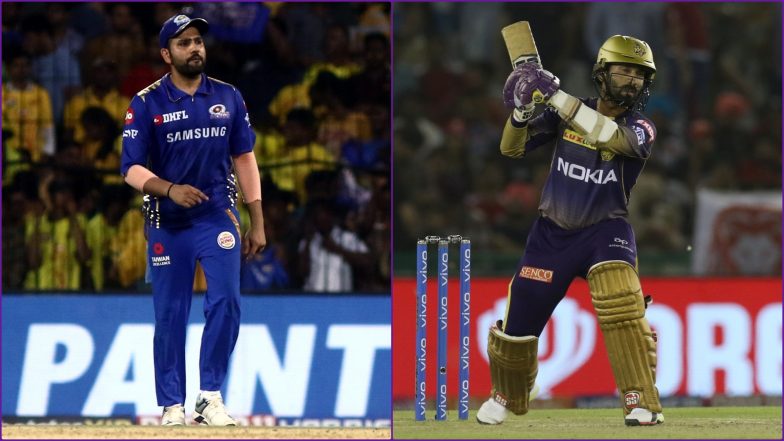 Kolkata Knight Riders (KKR) take on Mumbai Indians (MI) at the Wankhede Stadium knowing a win takes them to the knock out stage of VIVO Indian Premier League (IPL) 2019. The game is equally important for the Sunrisers Hyderabad (SRH) who would be hoping Mumbai does them a huge favour by defeating Kolkata who they lead on net run rate. So, the last league game is generating a lot of buzz as it involves the fate of two quality sides. Mumbai have guaranteed themselves a top-four finish but would love to replace Delhi in the second position with two points at home. In terms of head to head, the two team have played 24 games with Mumbai winning 18 and Kolkata managing only 6 wins. Here is what happened in their last five encounters. MI vs KKR, IPL 2019 Match 56 Preview: Kolkata Knight Riders’ Fate Hangs in Balance Ahead of Match Against Mumbai Indians.

Kolkata batsmen dismantled the Mumbai bowling unit putting up a massive 232/2 batting first in their twenty overs. Andre Russell hit a 40 ball 80 while fifties from openers Shubhman Gill and Chris Lynn were crucial for the home team’s cause. Mumbai’s response was equally brilliant thanks largely to the efforts of Hardik Pandya who smashed 91. Kolkata eventually won the game by 34 runs.

A massive victory for the Mumbai Indians winning the game by 102 runs after putting 210/6 on board. Ishan Kishan was the star of the show for Mumbai smashing a 21 ball 62 for the Men in Blue. In response, Kolkata were never in the contest folding for 108 in 18 overs with the Pandya brothers picking up four wickets.

Mumbai did well to defend a total of 181 on a flat Wankhede wicket which is not an easy task against a quality batting line up as that of Kolkata. The visitors only had Robin Uthappa as one player who played with responsibility while the rest just threw away their wickets resulting in a 13-run loss.

In a high-pressure qualifier 2 of the Indian Premier League 2017, Mumbai Indians led by the bowling of Karn Sharma and Jasprit Bumrah restricted Kolkata to just 107 in 18.5 overs. The pair picked up seven of the ten wickets that fell in Kolkata’s innings to absolutely dismantle their batting. Mumbai had little problems getting to the final with a comfortable six-wicket win.

Yet another victory for the men from Mumbai as they restricted Kolkata to 164/8 who were in pursuit of 174 runs for victory. The fifties from Saurabh Tiwary and Ambati Rayudu got Mumbai to a decent total, but it was their bowling that helped them tighten the screws over Kolkata as they won a close contest by nine runs.

Kolkata Knight Riders is a team that performs under pressure, and they will relish this do or die game. If their big names click, KKR should be in the eliminators.