An Indian fan, who was among the section of the crowd who were asked to leave the SCG for alleged racial abuse against Indian pacer Mohammad Siraj during the 3rd Test, has defended the accused saying he didn’t hear any racial taunts against the bowler. 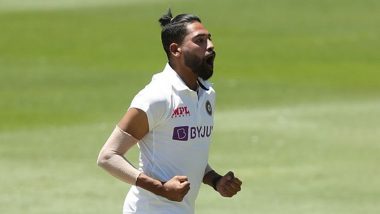 An Indian fan, who was among the section of the crowd who were asked to leave the SCG for alleged racial abuse against Indian pacer Mohammad Siraj during the 3rd Test, has defended the accused saying he didn’t hear any racial taunts against the bowler. The incident occurred just before Tea on Day 2 as play was halted after the 26-year-old complained about being targeted by a number of spectators. Video Claiming Spectators at SCG Use 'Racial Slur' Against Mohammed Siraj During IND vs AUS 3rd Test Goes Viral.

Prateik Kelkar, a Sydney resident who was present during the game, in an interview with Sydney Morning Herald, said that he was ejected from the stands after trying to explain the ground security that Mohammed Siraj was not racially abused.

“We got kicked out as well for sticking up for them, for saying that they didn’t say anything,” Kelkar said. “[Siraj] was pissed off because he got hit for two sixes the previous over. He came to field on the boundary. He was copping it a bit and then they said: ‘Welcome to Sydney, Siraj’. Next thing we knew they were getting kicked out,” he added.

“What I wanted was that both sides of that story be heard. It’s not fair they are getting vilified in the media when I can tell you they have done nothing wrong. I am an Indian. I have been racially abused before in Australia and I can tell you that it wasn’t [racial abuse]. As you can tell from my accent, if there was something racist going on, I would have heard it and done something about it,” Kelkar added further.

Several ex and current players, including Virat Kohli have asked for strict action against the culprits and general racism in cricket following that incident. Australian opener David Warner also apologised to the Indian team and Mohammed Siraj for the behaviour of certain spectators.

Cricket Australia also released a statement condemning the act while ICC offered them full supports to carry out an investigation into the matter. There were reports of Siraj and Jasprit Bumrah being racially targeted on Day 2 of the game as well.

(The above story first appeared on LatestLY on Jan 13, 2021 07:49 PM IST. For more news and updates on politics, world, sports, entertainment and lifestyle, log on to our website latestly.com).