Most Player Appearances at Cricket World Cups: Ahead of CWC 19, Here's a List of Top-10 Cricketers Who Have Played Most Number of Matches 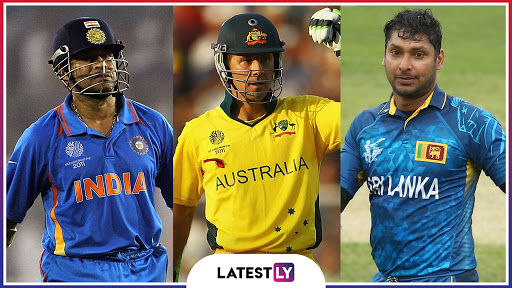 Many players will make their debut, while some others appear in their final ICC tournament, as ICC Cricket World Cup 2019 sets off on May 30. Among those that might retire at the end of CWS 2019, many will have already played in four-five World Cup tournaments. Let’s take a look at those that have played the maximum number of matches at the ICC global showpiece.

From Sachin Tendulkar becoming only the second player to appear in six World Cup tournaments to Ricky Ponting and Glenn McGrath appearing in three World Cup finals, this list contains the top 10 cricketers, who have played the most number of matches at the ICC tournament. ICC Cricket World Cup 2019: Check out the List of Cricketers Who Walked Away With Player of the Tournament Trophy Across All Editions.

Ricky Ponting and Glenn McGrath are the only players in the list to have won three World Cup titles. Sachin, Jayasuriya, Wasim Akram and Aravinda de Silva have won one World Cup title each. Sachin along with Javed Miandad is the only two players to have appeared in six tournaments. ICC Cricket World Cup: Here’s a Look at Some Records and Stats Ahead of CWC 2019.

Among the current players, Chris Gayle is the only player playing his fifth World Cup, while MS Dhoni, Shoaib Malik and Lasith Malinga will be playing their fourth World Cup.