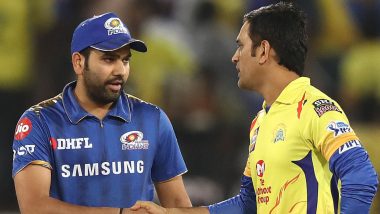 IPL 2020 will begin with a blockbuster opening clash between defending champions Mumbai Indians and last season’s runner-up Chennai Super Kings. The match will be a repeat of IPL 2019 when Mumbai beat CSK by 1 run to win a record fourth IPL title the most by any team in Indian Premier League history. Both teams will hope to start a new season with a win but CSK will seek revenge for the final defeat. Meanwhile, Chennai Super Kings captain MS Dhoni has won the toss and opted to field first. IPL 2020: MS Dhoni Returns to Action As Chennai Super Kings Begin IPL 13 Against Arch Nemesis; Here’s What CSK and Dhoni Fans Can Look Forward to This Season.

Both Mumbai and CSK also played the opening match two seasons ago and CSK went to win that match in a dramatic fashion. They will hope for a similar result with the three protagonists from that game Dwayne Bravo, Ravindra Jadeja and Kedar Jadhav still part of Chennai team. Mumbai, however, beat MS Dhoni’s team four times last season, including in the eliminator and the final.

But unlike the last edition and the edition before that, IPL 2020 will be played in a different shore this season with no favourable home conditions and crowd support. Indian Premier League 13 is being played in the UAE this year due to the COVID-19 pandemic and Mumbai Indians will do well to remember their poor record in the UAE. Rohit Sharma-led MI lost each of their five games in the UAE when the IPL was played here in 2014.

They are aiming to become the second team after CSK to successfully defend the IPL title. Dhoni-led CSK won the IPL title for the consecutive seasons between 2010 and 2011. Mumbai have won it four times but never in successive seasons. CSK are three-time winners of the competition and eight-time finalist. They have reached the final in the last two seasons and won the title in 2018. Dhoni and Co will hope they can taste success again this season but they must cross Mumbai first.

(The above story first appeared on LatestLY on Sep 19, 2020 07:04 PM IST. For more news and updates on politics, world, sports, entertainment and lifestyle, log on to our website latestly.com).