Nathan Coulter-Nile Not Surprised After Being Released From Mumbai Indians Squad, Hopes To Find New Team at IPL 2021 Players Auction 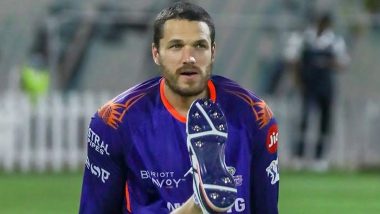 Australian fast bowler Nathan Coulter-Nile wasn’t surprised Mumbai Indians released him from their squad ahead of the IPL 2021 players auction. The 33-year-old was picked for INR 8 crore at last year’s auction but failed to impress in IPL 2020 after taking only five wickets in the seven matches he played. Coulter-Nile was out with injury at the start of last season’s IPL in UAE and only returned in the second half of the tournament. He took 2/29 in the final against Delhi Capitals guiding Mumbai Indians to their fifth IPL title. Wasim Jaffer Comes up With a Hilarious Response After a Fan Suggested him to Trade Chris Gayle With Another Team for IPL 2021 (See Post).

"I was expecting that was going to happen," Coulter-Nile was quoted as saying by ESPNcricinfo. "They paid overs for me so I thought that was going to happen. Hopefully, I can get picked up again this year. I've got nothing else on so hopefully I can get to the IPL,” he said after being informed he had been released from the MI squad. IPL 2021: How Much Money Can Each Team Spend in Players Auction? Take a Look at the Remaining Purse of All Eight Indian Premier League Franchises.

The news came at a bad moment for the cricketer, who had last played for the Australia national team in 2019. Making his return in the Big Bash League (BBL) for Melbourne Stars after missing three weeks of action due to a calf injury, Coulter-Nile was exceptional in the first 15 balls he bowled against Renegades taking three wickets.

But then he went on to concede 29 in his final eight deliveries, which included three sixes and two fours as Renegades chased down the 159-run target with two deliveries to spare despite needing 25 runs from the final two overs. Coulter-Nile bowled the penultimate over and conceded 19.

Minutes later Coulter-Nile would find out he was one of the seven players MI released from their squad, including his Australia teammate James Pattinson. But Coulter-Nile is hopeful of finding a new team in the upcoming players auction next month. He has so far represented Delhi Daredevils (now Delhi Capitals), Kolkata Knight Riders and Mumbai Indians in two separate stints between seven years.

The right-arm pacer also hopes good performances in the IPL gets him back into the national team fold. Coulter-Nile’s last appearance in Australia jersey came in an ODI against Bangladesh two years ago. He knows he is far from a call-up but is keen on working hard and making a return. "I don't think I'm in the mix at all. It's just reading between the lines I think. I haven't played for Australia in two years or something. So, I think I can just work it out myself,” he said.

(The above story first appeared on LatestLY on Jan 22, 2021 04:14 PM IST. For more news and updates on politics, world, sports, entertainment and lifestyle, log on to our website latestly.com).