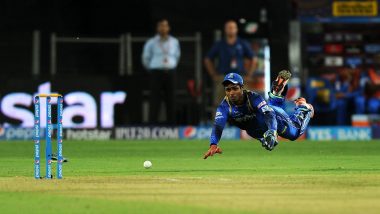 His flying catches for Rajasthan Royals in the Indian Premier League (IPL) are world-famous. Samson, who plays as a top-order batsman for the Royals, has impressed everyone not only with his explosive batting but also with his athleticism in the field and has taken excellent some excellent catches over the years. And it seems, the 25-year-old has been honing his skills during the lockdown. Samson took to Twitter to share a picture of himself diving on the sand in a beach by the sea. Suggesting that he was flying, Samson captioned the picture as “Next stop LANKA.” MS Dhoni Long Hair: ICC Shares MSD’s Old Photo From 2006 Champions Trophy in Flashback Friday Post, Fans Say 'Miss You Mahi'.

The picture certainly caught everyone’s attention, including Samson’s IPL team Rajasthan Royals who likened him to a “Superman.” The IPL franchise quoted Samson’s picture and compared Samson to the flying superhero while describing the original superhero as “Superman Lite.” Fans had a gala time laughing at the picture and also crediting the admin of RR’s twitter handle for their epic troll level. ‘Timing It Like Old Times’: Mohammad Azharuddin Rolls Back the Years and Picks Up a Cricket Bat Again (Watch Video).

Meanwhile, like most other sportspersons Samson has been spending the time off cricket with his family and is at home amid the lockdown and the coronavirus pandemic. The 25-year-old wicket-keeper batsman had recently opened up on his mental state and his cricket and said he was trying to focus his game around MS Dhoni and was also learning to manage his emotions like the former Indian captain.

"I have learned to understand and focus more on my strengths and (be more) accepting (of) the failures. I try to contribute to the team's cause and try to take the team over the line. I am learning to focus and control my emotions while batting like MS Dhoni," Samson, who has so far represented India in four T20Is, said.

Under normal circumstances, Samson would have been busy playing for the Royals in IPL 2020. But with the COVID-19 virus and lockdown, the T20 tournament has been suspended indefinitely.

(The above story first appeared on LatestLY on Jun 05, 2020 04:10 PM IST. For more news and updates on politics, world, sports, entertainment and lifestyle, log on to our website latestly.com).