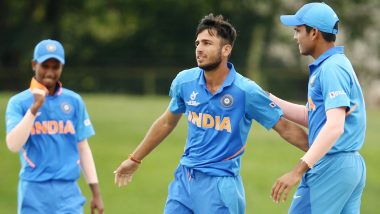 20-year-old spinner Ravi Bishnoi was handed his Indian Premier League (IPL) debut by Kings XI Punjab during the first game of the season against Delhi Capitals (DC). The spinner hails from Jodhpur, Rajasthan and impressed one and all during the ICC Under-19 Cricket World Cup 2020 earlier this year. Bishnoi was bought by KXIP for INR 2 Crore in the auction ahead of the IPL 2020. DC vs KXIP Live Score Updates IPL 2020.

Bishnoi bowls leg-break googly and he could prove to be impactful in the IPL 2020 given pitches in the United Arab Emirates (UAE) are dry. During the U19 CWC, Bishnoi played an important part in helping India qualify for the finals. In the summit clash against Bangladesh, the spinner picked first four wickets to fell and kept his side in the hunt in the low-scoring thriller. Meanwhile, as Bishnoi makes his IPL debut we bring to you quick facts related to the youngster.Is IPL 2020 Live Telecast Available on DD Free Dish, DD National, DD Sports, Doordarshan and Star Sports First TV Channels?

Being handed the opportunity, the 20-year-old spinner will be looking to make it big in the IPL 2020. Kings XI Punjab have never won an IPL title and young captain by KL Rahul is in charge of the side.

(The above story first appeared on LatestLY on Sep 20, 2020 08:00 PM IST. For more news and updates on politics, world, sports, entertainment and lifestyle, log on to our website latestly.com).