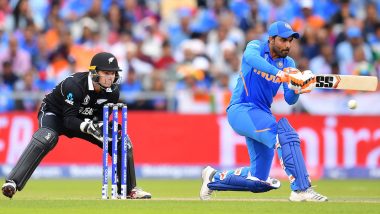 Indian all-rounder Ravindra Jadeja played a gem of a knock in the semi-finals of ICC Cricket World Cup 2019 against New Zealand. After bowling an economical spell, the southpaw smashed the Kiwi bowlers to all the parts off the ground and made 77 runs off 59 deliveries. His efforts, however, weren’t enough as the Men in Blue lost the game by 18 runs and got knocked out of the tournament. As India’s heart-breaking loss completes one year on Friday (July 10), the left-handed batsman took to Instagram and recalled the match. Jadeja called the game as ‘one of the saddest days’ as India lost the game despite giving their ‘best.’ This Day That Year: New Zealand Knocks India Out of 2019 Cricket World Cup.

“We try our best but still fall short sometimes One of the saddest days! #oneyearagotoday #semifinal2019,” wrote the veteran all-rounder while sharing one of his pictures from the game. Fans were completely disheartened when they came across Jadeja’s post and they consoled him by praising his brilliant effort in the game. Meanwhile, let’s look at his post. MS Dhoni Lacked Intent During India vs England ICC Cricket World Cup 2019 Match.

We try our best but still fall short sometimes 😔 One of the saddest days! #oneyearagotoday #semifinal2019

The game was scheduled to be played on July 9 and it also went underway. However, rain interrupted the game halfway through the match and the rest of the contest was played on the reserve day. Batting first, the Kiwis scored 239/8 courtesy half-centuries from skipper Kane Williamson (67) and Ross Taylor (74).

In reply, the Men in Blue got off to a disastrous start as the Virat Kohli, Rohit Sharma and KL Rahul got dismissed after scoring one run each. India’s defeat looked inevitable as they were reeling at 92/6 and the trio of Trent Boult, Lockie Ferguson and Matt Henry was breathing fire with the ball.

However, Jadeja joint forces with former Indian skipper MS Dhoni and the pair brought back in the hunt. Both the batsmen scored half-centuries. However, their efforts went in vain as Kiwis clinched the encounter and advanced to the finals where they eventually lost to England. Also, Dhoni hasn’t played a professional match after that encounter.

(The above story first appeared on LatestLY on Jul 10, 2020 02:01 PM IST. For more news and updates on politics, world, sports, entertainment and lifestyle, log on to our website latestly.com).