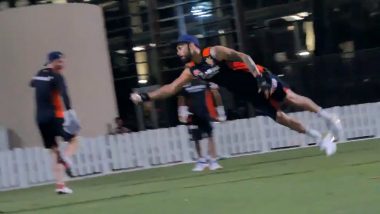 Opposition teams must brace themselves as Virat Kohli is looking is determined to guide Royal Challengers Bangalore (RCB) to the title in Indian Premier League (IPL) 2020. The RCB skipper has been hitting the training ground hard lately and seems to get even better with every practice session.  Recently, the official Twitter page of RCB shared a video on Instagram in which the talismanic cricketer can be seen executing a stunning one-handed catch during training.  The ball was thrown wide, but Kohli made a full-stretched dive and grabbed the catch to perfection. Virat Kohli Focussed to Lead Royal Challengers Bangalore to IPL 2020 Title Win.

The video also consisted of the fantastic catches of AB de Villiers and Parthiv Patel, but it will not be wrong to say that Kohli’s stunner stole the show. Despite not playing the game for a long time due to the coronavirus-induced break, the 31-year-old, who’s going to become a father for the first time in January, has shown no signs of rustiness and one can expect to see his blitzes in the T20 extravaganza. RCB Team Profile for IPL 2020: Royal Challengers Bangalore Squad in UAE, Stats & Records and Full List of Players.

In spite of having many T20 stars in the team, RCB haven’t been able to lift the trophy even once in the last 12 seasons, and they’ll be eyeing to break the jinx this time around. The addition of Aaron Finch has added more firepower to the already strong batting line-up. At the same time, Chris Morris and Dale Steyn have strengthened the fast-bowling department.

Also, RCB has several quality spinners in the form of Washington Sundar, Yuzvendra Chahal and Adam Zampa who’ll play a massive role in the slow and dead pitches of UAE. Well, the side certainly looks well balanced at the moment. However, they have to come good as a unit to get the glory. RCB will kick start their campaign against KL Rahul’s Kings XI Punjab on September 19 at the Dubai International Stadium.

(The above story first appeared on LatestLY on Sep 17, 2020 08:39 AM IST. For more news and updates on politics, world, sports, entertainment and lifestyle, log on to our website latestly.com).