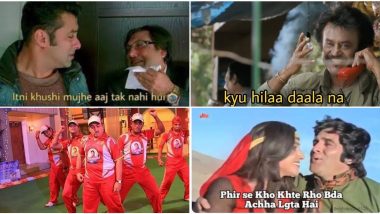 Royal Challengers Bangalore beat Sunrisers Hyderabad by 10 runs to start IPL 2020 with a win at the Dubai International Stadium. Excited RCB fans immediately flocked to Twitter to celebrate the win their first opening game victory since 2016. Virat Kohli’s men seemed to be slipping away from the game with SRH needing 43 from 29 deliveries. But Yuzvendra Chahal struck twice in the 16th over to bring back into contest and RCB held on to eventually see victory. A batting collapse from Sunrisers Hyderabad, they lost eight wickets from 32 runs, also helped their cause. But RCB are finally off the track with a fabulous win and fans celebrated the victory with funny RCB memes, jokes and GIFs on Twitter. SRH vs RCB Highlights IPL 2020 Match 3: Royal Challengers Bangalore Beat Sunrisers Hyderabad by 10 Runs.

It was a complete team performance for RCB with most of the batsmen chipping in with valuable runs and then the bowlers defending the total with some tight and attacking lengths. Yuzvendra Chahal was the star bowler for RCB with the canny legspinner swinging the match in RCB’s favour with a two-wicket over. He ended his four-over spell with 3/18. Shivam Dube and Navdeep Saini, who bowled the final four overs were also excellent with their lengths and helped RCB defend the total. Virat Kohli & RCB Funny Memes Go Viral After Skipper Gets Out for 14 Runs! Check Out Fans’ Priceless Reactions Over Disappointing Start to IPL 2020.

RCB, however, looked from the result they produced when Jonny Bairstow was at the crease. The England opener kept SRH in the game and almost took them home but fell with SRH still needing 43 runs to win. His 61 off 43 deliveries comprised off six fours and two maximum and was crucial in ARH chasing down the score. But Bairstow fell to Chahal and that was that for Hyderabad. Virat Kohli, AB de Villiers Batting Together: Fans Cherish Seeing the Duo in Action After a Long Gap During SRH vs RCB Dream11 IPL 2020 Match.

RCB Fans Are Ready to Celebrate the Win

RCB Off to a Winning Start

When you support RCB by not supporting and they end up winning the match #RCBvSRH pic.twitter.com/IUaoXeMpSw

Earlier, asked to bat first Devdutt Padikkal produced the goods in his debut match and struck a wonderful half-century in his maiden IPL innings. The 20-year-old left-handed opening batsman smashed 56 off 42 deliveries and stitched a 90-run opening stand with Aaron Finch (29) to give RCB the start they required. Once they departed, AB de Villiers took up the mantle and scored a 30-ball fifty to help RCB cross the 160-run mark and post a respectable score onboard.

(The above story first appeared on LatestLY on Sep 22, 2020 12:14 AM IST. For more news and updates on politics, world, sports, entertainment and lifestyle, log on to our website latestly.com).