Rohit Sharma Being Monitored by Medical Team, Not Yet Ruled Out of IND vs ENG 5th Test, Confirms Coach Rahul Dravid

India captain Rohit Sharma, who has tested positive for Covid-19, is being monitored by the BCCI medical team and hasn't been ruled out of the Edgbaston Test against England, beginning on July 1, head coach Rahul Dravid confirmed on Wednesday. 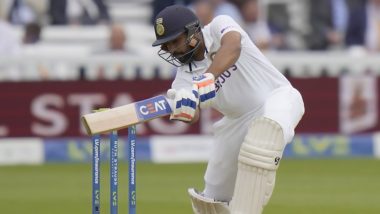 Birmingham, June 29 : India captain Rohit Sharma, who has tested positive for Covid-19, is being monitored by the BCCI medical team and hasn't been ruled out of the Edgbaston Test against England, beginning on July 1, head coach Rahul Dravid confirmed on Wednesday. According to Dravid, the Indian team management will take a final decision after examining two more test reports of Rohit. The 35-year old Sharma tested positive on the second day of the warm-up match in Leicester last week and is currently serving the five-day isolation as recommended by the UK government. Today was the fifth day, but Rohit was absent from India's training session.

"Rohit is being monitored by our medical team, he has not yet been ruled out. Obviously, he needs to get the negative test to be available. So we will keep monitoring that, we've still got close to 36 hours to go. He will have a test later tonight and maybe one tomorrow morning as well. And then we'll see," Dravid said in a virtual press conference. "Obviously, he'll have to come out of that, and it's really up to the medical team and sports science team to decide on that. We haven't had a chance to see him, since he is in isolation. But we will keep monitoring the situation," he added. The coach further said that the clarity on Rohit's health will come from the chief selector Chetan Sharma and they will finalise the playing XI for the rescheduled Test after accessing the whole situation. Rohit Sharma Still Not Ruled Out Of 5th Test Against England, Confirms Rahul Dravid.

"It's probably better that the communication comes officially from official sources (selectors).Once we have exact clarity on Rohit, you'll hear something from the official sources. It's not for me to give out official communication," he said. While the official update from the BCCI on who will lead India in case Rohit fails to recover on time to play in the Edgbaston Test is awaited, it is understood that Bumrah will take up the role. Notably, India didn't nominate a vice-captain after KL Rahul, who was named Rohit's deputy when the squad was picked in May, was ruled out having picked a groin injury earlier this month.

Bumrah was the vice-captain during India's previous Test series, against Sri Lanka at home. The pacer incidentally has never led in any form of cricket, so this will be his maiden captaincy stint. He will also become the first fast bowler to captain India since Kapil Dev. If the 28-year-old Bumrah walks out for the toss on Friday, he will be the eighth man to lead India since 2021. Talking about having so many different captains in such a short tenure of his coaching, Dravid agreed that is not the desired scenario but he feels that the coaching staff and players were well-equipped to handle that challenge. "It is what it is. When I took the job I wouldn't have predicted that there would be so many captains in the last six-seven months. That happens, right? In the times that we are living in, with Covid, there have been some unfortunate injuries to people. Even here, it is quite unfortunate what has happened to Rahul and Rohit in the last three weeks for us. And sometimes we've had to balance out the workloads of people. So it happens," said Dravid. Virat Kohli’s Century Drought Not Worrying, Star Player Doesn’t Lack Motivation or Desire, Says Rahul Dravid Ahead of IND vs ENG 5th Test.

"Of course, it is not something you envisage when you first start off, but if a situation arises then you react to that, you deal with that. And in spite of the number of captains we have had, we have played very good cricket over the last six to eight months. Yes, obviously the South Africa Test series was probably the one I would have liked to have won after going one-up. But even there I thought we were not outplayed, we were very close in a lot of those games. We had a few unfortunate injuries and some of our main players were probably not available for that Test series," he added. The 49-year-old hoped that the team might not have to deal with these situations in future and even if something happens, they have got contingency plans.

"We are keeping our fingers crossed and hoping that we don't have to deal with these situations, but they seem to come up and we have to react. We are not fazed by it. We are clear about our communication with people. We know what is going to happen over the next few days. If something happens, we have got contingency plans and, within our group, within our team, we know what's happening. That's really important for us," said Dravid.

(The above story first appeared on LatestLY on Jun 30, 2022 11:36 AM IST. For more news and updates on politics, world, sports, entertainment and lifestyle, log on to our website latestly.com).