The Madhya Pradesh all-rounder has risen in stature as an all-rounder ever since the second leg of IPL 2021 in the UAE. With him having a good Vijay Hazare Trophy, it has been reported that he is in pole position to replace out-of-form Hardik Pandya in the side. 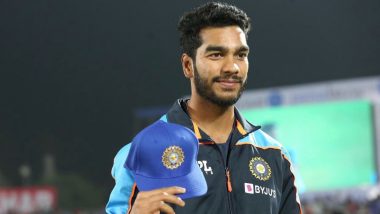 Hardik Pandya's performance in India colours has been a talking point for quite a while. The Baroda cricketer, who bowled very few overs in the T20 World Cup 2021 in UAE has not been in the best of forms and with his struggles related to fitness, his chances of retaining a spot in any of India's sides across formats has diminished severely. Former India cricketer Saba Karim, stated that India have found an able replacement for Pandya in Venkatesh Iyer. The tall left-hander took IPL by storm in the UAE this year where he showcased his talent with both bat and ball and almost won Kolkata Knight Riders the title.  "I believe that Venkatesh Iyer and Ruturaj Gaikwad have almost entered the first-team squad, and I'm talking about white-ball cricket. If we have to start the preparation for the 2023 World Cup, these two players should be part of the squad as soon as possible," Karim said on a podcast named Khelneeti. Priyank Panchal Quick Facts: Things To Know About Rohit Sharma's Replacement for South Africa Test Series

"They should be given as much exposure as possible. Both these players provide a different spectrum for the team. Gaikwad can be the backup opener with Rohit Sharma and KL Rahul going strong. On the other hand, Iyer has performed really well while batting at No. 5 or No. 6 in the Vijay Hazare trophy. If we are looking at the replacement for Hardik Pandya, we have already found the player," he added.

With a very impressive IPL behind him, Iyer was handed a call-up to the T20I side for the series against New Zealand. He did perform decently and now he has carried on that form in the Vijay Hazare Trophy, where he has notched up 348 runs in four matches, with two hundreds. Also, he has taken eight wickets so far. As a matter of fact, it has also been reported that he along with Ruturaj Gaikwad could board the plane to South Africa for the ODI series.

India indeed boast of a pretty rich bench strength when it comes to limited overs cricket and Karim reckons that head coach Rahul Dravid is preparing 20-25 players for the T20 World Cup next year and ODI World Cup in 2023. "Rahul Dravid has seen these players for quite a while now. The way Dravid used to prepare as a player, he must be prepared in the same way as a coach. He must have thought about a core of 23-25 players in the white-ball cricket circuit. He must have started the preparation for the World Cups," he said.India’s Tour of South Africa 2021–22: Quinton de Kock Could Miss Part of Test Series With Wife Expected To Give Birth

(The above story first appeared on LatestLY on Dec 13, 2021 11:51 PM IST. For more news and updates on politics, world, sports, entertainment and lifestyle, log on to our website latestly.com).