Team India shattered the record books with the historic three-wicket triumph over Australia in the fourth and final Test at the Gabba in Brisbane. Rishabh Pant, Cheteshwar Pujara and Shubman Gill shone on the last day as the Aussies suffered a Test defeat at the Gabba for the very first time since 1988. 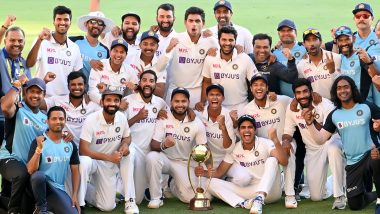 Team India shattered the record books with the historic three-wicket triumph over Australia in the fourth and final Test at the Gabba in Brisbane. Rishabh Pant, Cheteshwar Pujara and Shubman Gill shone on the last day as the Aussies suffered a Test defeat at the Gabba for the very first time since 1988. With this, India also became the first Asian team to register successive Test series victory down under. Sachin Tendulkar, Virender Sehwag, Wasim Jaffer and many other prominent members of cricket fraternity went absolutely berserk on social media as congratulatory messages poured in for Ajinkya Rahane’s troop. Ravi Ashwin Takes to Twitter to 'Give it Back' to Tim Paine After Sledging Incident Following India’s Historic Series Win.

This was India’s third successive Test series victory over Australia but unarguably the most emphatic one. Notably, the visitors didn’t have services of many key players, namely Virat Kohli, Ishant Sharma, Ravindra Jadeja, and Ravichandran Ashwin, Jasprit Bumrah, Mohammed Shami and Hanuma Vihari in the final fixture. In contrast, the home team had a full-strength squad. However, the young guns defied all the odds and took their team to supremacy. While Pant, Pujara and Gill stole the limelight in the final day, Washington Sundar, Shardul Thakur, and T Natarajan also brilliantly played their parts.  Meanwhile, let’s look at how cricket stars reacted to India’s win. #INDvsAUS: Ranveer Singh, Shah Rukh Khan And Other Celebs Shower Congratulatory Messages.

For all of us in 🇮🇳 & across the world, if you ever score 36 or lesser in life, remember: it isn't end of the world.

The spring stretches backward only to propel you forward. And once you succeed, don't forget to celebrate with those who stood by you when the world wrote you off. pic.twitter.com/qqaTTAg9uW

Virender Sehwag Praises In His Own Style!!

India had many players injured, but what has been injured more has been the Australian arrogance & pride.

The test series has been like a movie with every member of Indian Team being a hero & some of them Superheroes.

Two back to back series wins IN Australia 🤯 Hats off to this team! #AUSvsIND pic.twitter.com/qYNkd4Kkpi

Message From The Skipper!!

WHAT A WIN!!! Yessssss. To everyone who doubted us after Adelaide, stand up and take notice. Exemplary performance but the grit and determination was the standout for us the whole way. Well done to all the boys and the management. Enjoy this historic feat lads. Cheers 👏🏼🇮🇳 @BCCI pic.twitter.com/CgWElgOOO1

Congrats to the Indian cricket team @BCCI That’s one of the best series wins I can ever remember on Aust soil & to do it after being bowled out for 36, plus a depleted squad-shows tremendous character, resilience, courage & belief. Just fantastic @RaviShastriOfc @ajinkyarahane88

Meanwhile, India have also displaced Australia at the top of ICC World Test Championship points table with this win. They also become the new second-ranked Test team whereas the Aussies slip down to the third spot. Team India will next take the field on February 5 as they host England in the first Test of the five-match series in Chennai. The home team must be high on confidence as many key players will be back on the field.

(The above story first appeared on LatestLY on Jan 19, 2021 02:53 PM IST. For more news and updates on politics, world, sports, entertainment and lifestyle, log on to our website latestly.com).