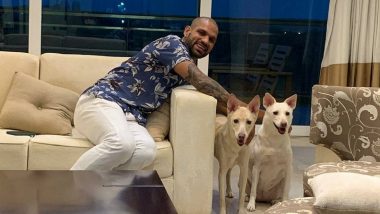 New Delhi, June 27: Two new members have been added into the Shikhar Dhawan family as the India opener announced on social media that he has adopted a couple of dogs. Dhawan shared pictures of his canine friends on Twitter and also revealed that he has named them Chloe and Valentine. His post read: "Adopted these cuties today. Chole and Valentine our new family members."

With no cricket going on right now due to the coronavirus pandemic, Dhawan has been relatively active on social media. Recently, he had uploaded a video in which he was seen riding a horse and his post read: "Enjoyed this feeling after ages. What a ride." To this, spinner Kuldeep Yadav commented: "paaji wah ji wah akele akele (paaji you are going at it alone)." Shikhar Dhawan’s ‘Shaitaani’ With Pet Dogs Will Make You Go ROFL (Watch Video).

Dhawan took note of this request from his teammate and replied: "aaja meri jaan jab marzi (come and join me whenever you want to)." Dhawan had also recently spoken about the prospect of playing matches behind closed doors in the wake of COVID-19 crisis.

The upcoming England-West Indies three-Test series, starting July 8, will be the first series where the new changes in the sport will come into force. "Obviously, we are going to miss playing in front of a huge crowd if tournaments take place behind closed doors, the fans bring their own charm and aura, but at the same time it would be an opportunity as we have been sitting at our homes for two months now," Dhawan had said during an Instagram live with Sri Lanka all-rounder Angelo Mathews.

(The above story first appeared on LatestLY on Jun 28, 2020 12:03 AM IST. For more news and updates on politics, world, sports, entertainment and lifestyle, log on to our website latestly.com).