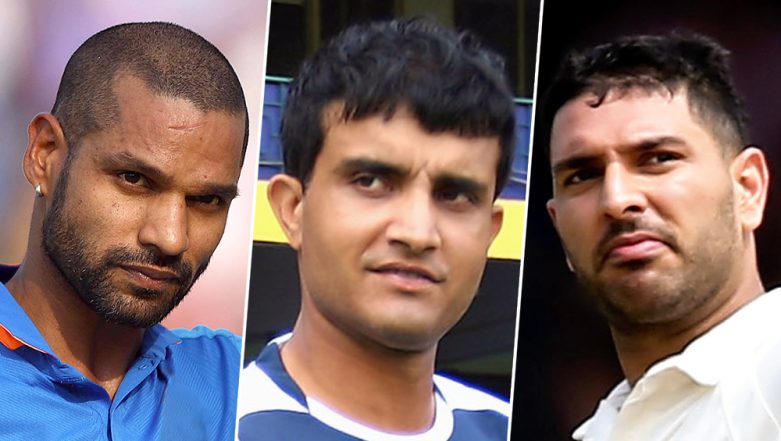 Shikhar Dhawan and Yuvraj Singh are quite close to each other. Both are seen indulging into a funny banter quite often and are seen pulling each other’s leg on social media. Yuvi and Gabbar both troll each other hilariously and have given us many ROFL moments. This time it was no different. So here’s what happened. Shikhar Dhawan, who is now playing for Delhi Capitals shared a picture with Sourav Ganguly. The two were snapped during the practice session of the Delhi Capitals. IPL 2019: Delhi Capitals Fans Kept Away From Kotla for Security Reasons.

Dhawan went on to ask the fans to caption the picture. “So, what are we talking about? Caption this and tell me Dada mujhse kya kah rahe hain?,"read the caption of the picture. While his followers came up with comments, Yuvraj Singh had a very witty reply. “He's saying jatt ji if you bowl in the ipl please make sure your wearing full sleeves T-shirt." Shikhar Dhawan also had a reply to this comment. IPL 2019 Schedule in PDF: Download VIVO Indian Premier League 12 Full Timetable With Fixtures, Matches, Team and Venue Details.

So, what are we talking about? Caption this and tell me Dada mujhse kya kah rahe hain? . . . #ThisIsNewDelhi #DelhiCapitals #SouravGanguly #dillikibaat #Repost

Check out the snapshot of the banter below:

Shikhar Dhawan who played for the Sunrisers Hyderabad in IPL 2018, has been transferred to Delhi Capitals this year. He was swapped with Shahbaz Nadeem, who is now with SRH. Talking about Delhi Capitals, the team the franchise yesterday had barred the fans to not enter the Ferozshah Kotla Stadium for security reasons. The team has played two practice games this season at the Ferozeshah Kotla but in front of empty stands as fans weren't let into the stadium.