The 26-year old battled his way to a half-century on Test debut against New Zealand in Kanpur and bailed India out of potential trouble with Ravindra Jadeja. Cricket fraternity was heavily impressed with him and his knock and praised him following his unbeaten knock. 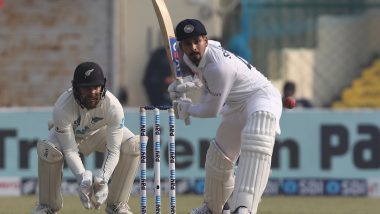 Shreyas Iyer did make the most of the opportunity that he got. With star players like Virat Kohli, Rohit Sharma and KL Rahul not in the team, the young Mumbai batsman was handed a Test debut against New Zealand in Kanpur on Thursday, November 25 and he did make the most out of the opportunity. Playing Test cricket for the first time, he did get off to a nervous start but showed why he was such a highly-rated player in Indian cricket with a perfect half-century (75*), which would go down as one of the best knocks on Test debut by an Indian. It was he who steadied the ship when India were in a spot of bother at 145/4 and along with the experience of Ravindra Jadeja, the Ajinkya Rahane-led side finished at 258/4. India vs New Zealand 1st Test 2021 Day 1 Stat Highlights: Shreyas Iyer, Ravindra Jadeja and Shubman Gill Fifties Help India End at 258/4 As Kyle Jamieson Takes Three Wickets

VVS Laxman was full of praise for the young star. While talking on a Star Sports show, he said, "The bench is strong as far as Indian cricket is concerned. This might be Shreyas Iyer's first Test but he is an established international cricketer (in white-ball)." Further, he spoke about Iyer not compromising on his natural game, knowing when to defend and when to attack, praising the youngster's character. Video of Man Chewing Gutkha During IND vs NZ Kanpur Test Match Goes Viral, Netizens Cannot Stop Sharing Funny Memes!

"He knew when to attack. When to be a little subdued. What was really good to see was that he did not compromise on his natural game. The last first-class match he had played was almost two years back. The toughest challenge for a youngster is the transformation from red-ball cricket to white-ball cricket. The temperament is different, the shot selection is challenged. Iyer absorbed the pressure and showed what a strong character he is", he added.

Twitter was also flooded with Indian cricket stars congratulating the 26-year old on a spectacular Test debut. Take a look at some of the wishes below:

Congratulations on your Test debut and half century @ShreyasIyer15 👏 All the hard work you’ve put in has paid off bro 🤗🇮🇳 pic.twitter.com/YKMLv5MtrG

What a knock! What a start to your Test career! So happy and proud, bro @ShreyasIyer15 👏🏼🥳 pic.twitter.com/W68w0A1Coh

IPL teams also joined in praising the 26-year old on a solid Test debut. Take a look at some of their wishes for the youngster:

What a start to your Test career, Iyer! 😍#INDvNZ #SaddaPunjab pic.twitter.com/1FNFF3nutM

Stepping up when the team needed it the most. Half-century for Shreyas Iyer! 👏🏻

A mature and composed innings from the debutant. 🤩#PlayBold #TeamIndia #INDvNZ pic.twitter.com/GMVjErp6Ou

But the job is not yet done fully. India would need Shreyas Iyer to score more (probably a hundred) on the second day to take the side to a respectable total before unleashing its spin attack on the Kiwis.

(The above story first appeared on LatestLY on Nov 25, 2021 09:51 PM IST. For more news and updates on politics, world, sports, entertainment and lifestyle, log on to our website latestly.com).