Sunil Gavaskar Shares His Thoughts on Rishabh Pant’s Innings in WTC Final, Says He Breached the Line of Carefree and Careless

Pant batted in his usual audacious approach in India's second innings of the World Test Championship final, even when the situation required better shot selection from him. 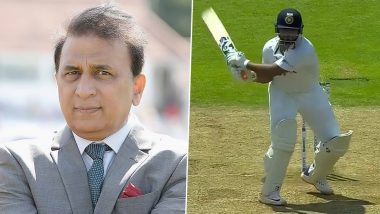 Indian batting legend Sunil Gavaskar criticized Rishabh Pant's audacious approach during India's batting in the second innings in the World Test Championship final against New Zealand on Wednesday. Pant had come out to bat at a time when India lost two key players in captain Virat Kohli and Cheteshwar Pujara quickly within a short span of time. His batting style in Test cricket has been a discussion point, especially after India registered a dramatic series win in Australia. This time, his approach was not appreciable as he should have opted to spend more time at the crease and put India at a point of safety. Here is the New Meme Material! Indian Fan's Hilarious Reaction To Ajinkya Rahane's Dismissal In WTC Final 2021 Goes Viral (Watch Video)

While commentating during the match, Gavaskar said, “There is a thin line between carefree and careless. Pant has at times breached the line of carefree and careless." Pant was India's top scorer of the innings with 41 runs but his repeated efforts to disturb the bowlers' line and length by coming down the track and taking them on, didn't work. As a matter of fact, he was lucky to survive after Tim Southee dropped a catch very early in his innings.

But Pant continued attempting high-risk shots, some of which yielded runs but perhaps wasn't the need of the hour. As a matter of fact, India could manage only 14 runs after Pant departed. They eventually were bowled out for 170. “A couple of times he went for a big hit when he was in the 90s and missed an opportunity to score a hundred. The only issue with Pant is always going to be his shot selection; otherwise, he has a got the defense, got all the shots and technique,” Gavaskar added.

(The above story first appeared on LatestLY on Jun 24, 2021 09:18 PM IST. For more news and updates on politics, world, sports, entertainment and lifestyle, log on to our website latestly.com).