The Time Is Right for Virat Kohli To Make a Comeback, Right? Indian Test Captain’s Situation Has an Uncanny Resemblance to That of Sourav Ganguly’s Back in 2006–07

Kohli today finds himself at the crossroads of making a comeback to form, much like how BCCI president Sourav Ganguly did way back in 2006-07 tour of South Africa. The question is, can Kohli do a Ganguly and prove his relevance as India's best, once again? 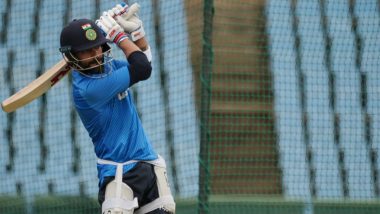 One of the many reasons why Sourav Ganguly is and would always be one of the most revered players in Indian cricket was his epic comeback during the tour of South Africa in 2006-07. Cricket aficionados would surely know the amount of pressure that was on him back then to prove a point. His involvement in that whole saga against the then head coach Greg Chappell--which is, one of Indian cricket's most infamous episodes--had seen the Prince of Kolkata being sacked from captaincy and even dropped from the team for a number of series'. Yet he found a way out to make a comeback and it was during the 2006-07 Test series in South Africa. Although he could muster just 51 runs in his comeback innings, it came with a roaring statement, something that pundits and fans alike say often--'Form is temporary, Class is permanent.' Fittingly, Ganguly ended as the highest run-scorer for India in that series with 214 runs in three innings, second to the Proteas duo of Ashwell Prince and Graeme Smith. All Is Not Well Between Virat Kohli and BCCI? Indian Test Captain Contradicting Board President Sourav Ganguly’s Comments Say So!

After 15 years, Indian Test captain Virat Kohli finds himself in a somewhat similar situation. Yes, fortunately, he has not had any ugly public episode with a member of the support staff or the board but there is, if one can argue, an uncanny resemblance of his current situation to that of Ganguly's. No hundred in two years, not in his best form, being sacked from ODI captaincy and then, surprising of all, a revelation that it was a decision informed to him just 1.5 hours before being made public! Plus, a reported controversy with BCCI president Ganguly is also slowly starting to take shape and truly, there cannot be more similarities in the two situations, 15 years apart.

Well, 2021 has really been unkind to Kohli, who was and is still regarded as one of Indian cricket's greatest ambassadors. And guess what? The resemblance starts to take a concrete shape if the upcoming Tests in South Africa are taken into account.  Two players, who are also two great captains, under a lot of pressure and a tour of South Africa, 15 years apart. Now the question is, can Kohli do a Ganguly and prove his relevance as India's best, once again? Year Ender 2021: From Virat Kohli vs BCCI Captaincy Controversy to Tim Paine’s Resignation Over Sexting Scandal, Check Out 5 Shocking Controversies That Rocked the Cricket World

There's absolutely no reason why he cannot. He has already shown ample examples of his class and genius with the bat, across formats and fans, especially Indians, would particularly have good sleep when he raises his bat to celebrate a 71st hundred, preferably in South Africa. This is the same guy who batted on a tough Adelaide wicket against a fiery Australia bowling attack led by Mitchell Johnson and gleefully took him on. And don't forget his 133* in Hobart as he whipped a yorker specialist like Lasith Malinga constantly for fours and sixes on the leg side. If anything, growing age has made him more experienced and at 33, he is still in the best shape of his life and can happily carry on for another 6-7 years.

With all boxes ticked, Kohli, theoretically, is at the crossroads of repeating what Ganguly did, 15 years ago, i.e make a statement with the willow in South Africa. And should he succeed, it might just be a solid answer to all detractors and would go down one of the best comebacks in the annals of Indian cricket. The time is indeed right for King Kohli to step up and create his magic with the bat again. And hopefully, this happens in the three-Test series against the hosts in South Africa.

(The above story first appeared on LatestLY on Dec 23, 2021 05:34 PM IST. For more news and updates on politics, world, sports, entertainment and lifestyle, log on to our website latestly.com).