Triple H heaped praises on Team India for their historic 2-1 triumph Test series triumph over Australia. After getting bundled out for 36 in the first match at the Adelaide Oval, the visitors were under the pump with the cricket world predicting a 4-0 whitewash. 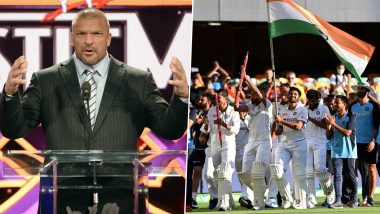 WWE superstar Triple H heaped praises on Team India for their historic 2-1 triumph Test series triumph over Australia. After getting bundled out for 36 in the first match at the Adelaide Oval, the visitors were under the pump with the cricket world predicting a 4-0 whitewash. Moreover, regular skipper Virat Kohli flew back home after the opening clash for the first child's birth. Despite all the odds, stand-in skipper Ajinkya Rahane marshalled his troop brilliantly and defeated a full-strength Australian team down under.  Team India's effort garnered praises from all over the world, and Triple H joined the bandwagon as well. Virat Kohli Praises Team India’s Grit and Determination After Historic Series Victory Over Australia.

In a conversation with Hindustan Times, Triple H hailed India's effort as a 'WWE-scripted level of comeback.' "I did follow it but unfortunately did not get to see it in real-time due to to the time difference. India pulling off a WWE-scripted level of comeback and winning is amazing. It's awesome, so proud of everybody there," Triple H (Paul Levesque), Executive Vice President of Global Talent Strategy & Development for WWE, was quoted as per saying. Sachin Tendulkar, Virender Sehwag, Wasim Jaffer and Other Cricket Stars Heap Praises on Team India After Historic Series Triumph.

The 51-year-old also said that he'd personally invite the team to come and watch the upcoming Superstar Spectacle, which takes place on January 26. "I will invite the team personally. Come, watch and be a part of the Superstar Spectacle and continue the celebrations. We would like to celebrate with you. If they want to a part of that, give us a call, will love to make that happen. I am incredibly proud of it, what a comeback, and congratulations," he added.

Meanwhile, Virat Kohli's men will next take the field on February 5 in Chennai as they host England in the first-Test of four-match series. Notably, the opening Test will mark the return of international cricket in India after the COVID-19 halt, and the home team would not want to disappoint the home crowd.

(The above story first appeared on LatestLY on Jan 22, 2021 04:50 PM IST. For more news and updates on politics, world, sports, entertainment and lifestyle, log on to our website latestly.com).