Kohli also praised fast bowler Jasprit Bumrah, who played a critical role with match figures of 9/86, the best haul by an Indian pacer in Australia. 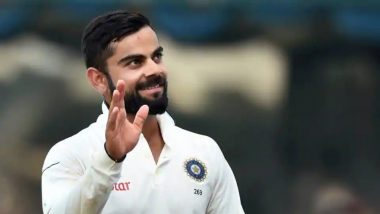 Melbourne, December 30: Taking a dig at uncharitable comments by former Australian players, Indian skipper Virat Kohli on Sunday credited the country's domestic structure for his team's victories during the ongoing tour of Australia. Former Australian star Mark Waugh and former leg-spinner Kerry O'Keeffe, who are commentators for Fox Sports, had made fun of the standards of India's first-class cricket championship Ranji Trophy during the third day of the Boxing Day Test.

But after India outplayed Australia by 137 runs in the third cricket Test to take a 2-1 lead in the four-match series here on Sunday, Kohli took the opportunity to hit back at the former stars. "Our first-class cricket is amazing. The tough conditions with the second new ball makes bowlers hard and bowling with the old ball proved to be a difference in this match," Kohli said during the post-match presentation. Virat Kohli-led Team India Wins Boxing Day Test by 137 Runs, Take Unassailable 2-1 Lead in the Series.

Kohli also praised fast bowler Jasprit Bumrah, who played a critical role with match figures of 9/86, the best haul by an Indian pacer in Australia. "He (Bumrah) was unlucky not to get wickets in Perth. The way he bowled, it was almost criminal that he didn't reap the rewards," Kohli said. Ravi Shastri Defends Virat Kohli’s on-field Antics Ahead of Boxing Day Test at MCG, Says ‘He is an Absolute Gentleman’.

"I certainly feel proud as a captain to watch these guys bowling in partnerships, nobody is trying to outdo another guy, it's all about what the team wants and the kind of breakthroughs ... That's why they are so special," he added. Bumrah, who was declared the man of the match, also took the opportunity to defend the standards of the Ranji Trophy.

"We train very hard and we are used to bowling a lot of overs in Ranji Cricket, so the body is doing well," Bumrah said. Bumrah, who represents Gujarat in the Ranji Trophy, ended 2018 with 48 Test scalps, the most by an Indian in his debut calendar year.

(The above story first appeared on LatestLY on Dec 30, 2018 06:33 PM IST. For more news and updates on politics, world, sports, entertainment and lifestyle, log on to our website latestly.com).