RCB picked Virat Kohli through a draft system in the inaugural 2008-edition of the tournament. Although he couldn’t make a mark in the first two seasons, scoring 165 and 246 runs respectively, he hammered 307 runs in 2010 - striking at 144.81- and never looked back since then. He emerged as the cornerstone of RCB batting line-up and played one sensational knock after another. 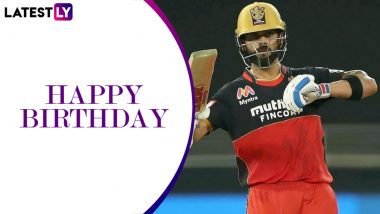 “Sachin Tendulkar has carried the burden of the nation for 21 years. It was time we carried him,” a young Virat Kohli said after India’s 2011 World Cup triumph. Although it seemed just a great line at that moment, Kohli eventually went on to become the successor of Master Blaster. From a rising sensation to a World beater, the talismanic batsman’s cricketing journey has been nothing but incredible. Owing to the fact, wishes are pouring in for him from all around the world as the Indian skipper celebrates his 32nd birthday. Be it Test, ODI or T20, be it Mumbai, Melbourne or Mount Maunganui, Kohli rose to every challenge which came his way and piled up a mountain of runs. The Indian Premier League (IPL) is one of many tournaments where Kohli, who represents Royal Challengers Bangalore (RCB), tormented the bowlers. RCB Funny Memes and Jokes Go Viral As Virat Kohli’s Team Qualifies for IPL 2020 Playoffs.

RCB picked Virat Kohli through a draft system in the inaugural 2008-edition of the tournament. Although he couldn’t make a mark in the first two seasons, scoring 165 and 246 runs respectively, he hammered 307 runs in 2010 - striking at 144.81- and never looked back since then. He emerged as the cornerstone of RCB batting line-up and played one sensational knock after another. From playing the anchor role to providing late flourish, Kohli proved to be a headache for opposition on numerous occasions, and he continues to be so. As the RCB captain turns a year older, let’s revisit five of his best IPL knocks. Virat Kohli Posts After RCB Secure IPL 2020 Playoffs Berth, Eyes Success in Knockouts.

RCB lost openers Cheteshwar Pujara and Chris Gayle cheaply while batting first against Delhi Daredevils (now Delhi Capitals). However, Kohli came into bat at number three and handled the mantle of run-scoring. After assessing the conditions in the initial part of the innings, Kohli shifted gears in the death overs and rained fours and sixes all over the park. Needing two runs of the last ball to register a brilliant century, the RCB skipper got run out after completing his first run and missed the milestone. Nevertheless, RCB posted 183/4 riding of Kohli’s efforts and eventually registered a four-run victory.

In a rain-affected encounter against Sunrisers Hyderabad, RCB needed 81 runs in just six overs. Kohli anchored the innings brilliantly and took the game deep. While dashers like AB de Villiers, Mandeep Singh and Dinesh Karthik couldn’t contribute much, Kohli single-handedly took the game deep, and the equation came down to RCB needing 13 runs off six balls. Kohli smashed two boundaries, and a six against an in-form Bhuvneshwar Kumar and Bangalore won the game by six wickets.

Kohli was on a rampage in IPL 2016 where he scored 973 runs with the help of four centuries. His first hundred of the season came against the now-defunct Gujarat Lions. After losing Gayle early, Kohli joined forces with AB de Villiers, and since then, it was one-way traffic.  The two dashers made an absolute mockery of the opposition bowlers as the ball was flying at the M. Chinnaswamy Stadium. In the process, Kohli registered his first IPL ton as RCB posted a mountain of 248/3 and comfortably won the game by 144 runs.

Chasing 175 against the now-defunct Rising Pune Supergiant, Kohli went after the opposition bowlers from the outset and made his intent very clear. While the likes of KL Rahul and AB de Villiers were struggling to find frequent boundaries, the RCB skipper was smashing the bowlers for fun. He went on to register yet another hundred in the tournament as RCB won by seven wickets.

With as many as stitches in his left-hand webbing, Kohli unleashed storm against Kings XI Punjab in Bengaluru. The record books were rewritten on that day as the RCB skipper was on full song despite the injury. He went on to score his fourth ton of the season, and his celebration depicted his delight. As a result, RCB posted 211/3 in the 15-over contest and won the game by 82 runs.

Kohli’s birthday is even more special this year as RCB have qualified for the IPL 2020 playoffs. However, Bangalore still needs to win three straight games – eliminator, Qualifier 2 and the final – to lift their maiden IPL title. Scoring 460 runs in 14 games, the birthday boy has also been in decent form. However, he has to unleash his best in the playoffs to break the 13-year-old jinx and lift the trophy. Meanwhile, RCB will next take the field against Sunrisers Hyderabad in the eliminator at the Sheikh Zayed Stadium in Abu Dhabi on November 6.

(The above story first appeared on LatestLY on Nov 05, 2020 08:00 AM IST. For more news and updates on politics, world, sports, entertainment and lifestyle, log on to our website latestly.com).